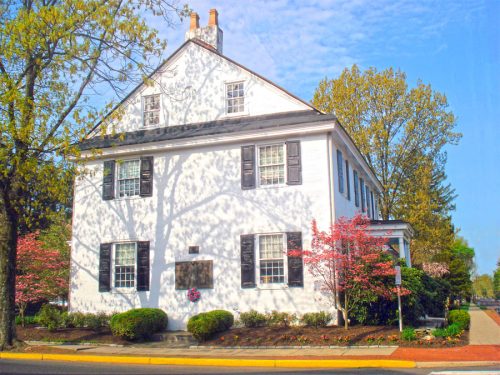 The Richardson House has stood in the center of Langhorne Borough at the intersection of Maple and Bellevue Avenues for almost 300 years.

Built in 1738 by Joseph Richardson, the house served as his residence and general store. General Washington housed some of his troops there following the battles of Trenton and Princeton and it is listed on the National Register of Historic Places.

The Association acquired the Richardson House and residents from the four boroughs and the township contributed funds to improve the House and place a plaque on the side of the building listing those who served in World War I. A nine-member board of directors continues to oversee the building and the grounds.

The Richardson House is the home of the Peace Center, the meeting place of the Four Lanes End Garden Club and several other organizations and is available for rental. It can accommodate groups of up to 50 people. The House is presently undergoing restoration.

Thanks to a grant from the Pennsylvania Department of Community and Economic Development arranged by Senator Tommy Tomlinson and to generous donations, the stucco has been repaired, the windows restored, the electrical system upgraded, and the air conditioning systems replaced.

Much remains to be done including exterior woodwork. For information on renting of the House, call 215-421-5588.  Donations to help restore the Richardson House may be sent to the Memorial Association at: 111 West Maple Avenue, Langhorne, PA 19047.