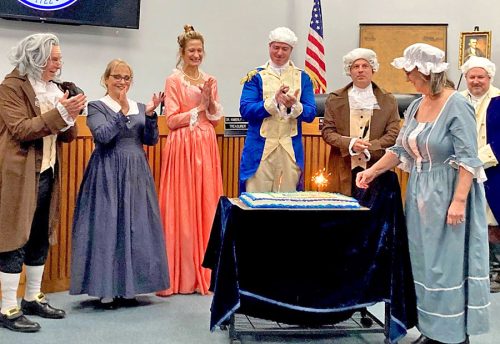 The township was originally settled by English colonists who came with William Penn on his voyage to Pennsylvania. The name Northampton came from the town of Northamptonshire, England.  The reenactment was held at the Township Building before the start of the Township Supervisors’ meeting.

Northampton Township Historical Commission chairperson Steve Arty began the program by reading the original proclamation aloud. The petition and a map had been presented to the Court of Sessions at Bristol on December 11th, 1722.

“Northampton Township is a community that has always been blessed with steadfast citizens, a concerned community, civic-minded leaders, lasting traditions and a resilient spirit that has helped it thrive for 300 years and prepared it to meet the challenges of the future,” Thomas said.

Hogan is new to his position but grew up in Levittown and worked in Bucks County.

“Here’s to another 300 years of a successful and great Northampton,” he said.

Selisker acknowledged the efforts of the 300th anniversary committee, thanking them for a year of hard work that created many activities and events for the community that incorporated their slogan, ‘Cherishing the Past, Celebrating the Present, Welcoming the Future.’

“I think you will all agree that Northampton is a great place to be, and it has been for 300 years,” he said. “We’ve had quite a year of celebration. Three hundred years is remarkable.”

The supervisors also recognized Parks and Recreations director Opalka, who retired after 34 years. The department expanded greatly under her leadership as the township’s first-ever P&R director.

After the festivities ended, the supervisors held their regular meeting while guests enjoyed refreshments in the lobby.

“It was a phenomenal experience for everyone involved not only for the residents of Northampton, but also for the visitors who came to help us celebrate,” Selisker said. “There were numerous activities.

“We tried to structure it and I know the committee felt really strongly about having something going on all the time so we had one whole yearlong celebration and it was wonderful from start to finish.”