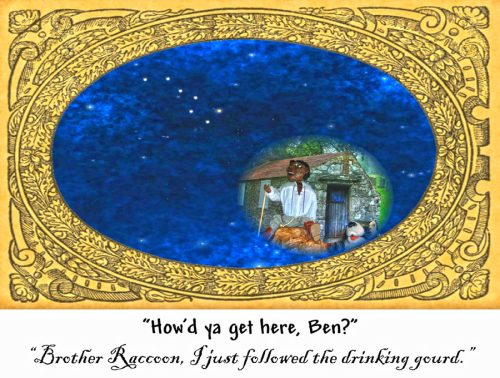 In A Son of Liberty it’s the Beast of the Auvergne that steals the show. After a song and dance routine from the Wizard of Oz, he showers the eight-year-old Marquis de Lafayette with questions. This adorable character is a lion hand puppet. His conversation with young Lafayette grabs the attention of the entire audience. What a good teaching tool he is!

Understanding this, the next year, with the production of Follow the Drinking Gourd, the use of animal hand puppets expanded to three: Silly Rabbit, Brother Raccoon, Brother Fox. The innocence of these guys, the simplicity of their questions and their childlike gestures connect with everyone. Connecting kids to history is what we’re all about.

Unlike our rod puppets, these hand puppets have movable mouths. This enhances their reactions, whether it be humor, excitement, frustration, you name it. There are logistical positives, too: hand puppets don’t require a puppet cradle – ours hang from hooks on the inside stage front; they require no costuming – if any, it’s simple; they aren’t fragile so can compact in storage; they can be cleaned; the puppeteer’s fingers control the puppet’s hands, a feature that allows for easy prop manipulation.

And back to furry mammals, remember Eddie Murphy’s Doctor Doolittle?