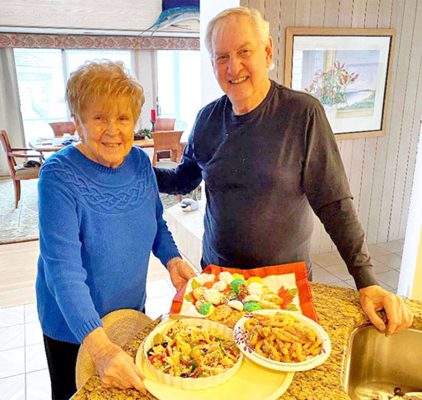 Former Upper Makefield resident John Oliano wasted no time stirring the pot, when he decided to sell his multi-million dollar international engineering and manufacturing conglomerate to retire and concentrate on his love of writing, travel and food. As a young Italian-American boy whose ancestors hailed from Benvenuto, Italy, memories of his mother’s recipes simmered on the stove, the mélange of garlic, onions, basil sauteing in a pan, while scents of other homegrown delicacies, wafted through the family home, out the door, enticing hungry neighbors.

Now, instead of cofounding and developing instrumentation used to inspect steel and metal alloys in industrial applications for nuclear energy aircraft, aerospace, automotive and transportation usage, he explores an arrangement of edible, culinary delicacies from European ports, then shares these mouth-watering recipes, accompanied by equally enticing photography, in his cookbooks.

He and his wife spent a lifetime of traveling to their touchstone Italy, as well as small villages, cafes, trattorias and global Michelin Star restaurants. Together, they attended several cooking schools in Italy. The New Haven, Connecticut-born author has a talent for procuring key ingredients from international restauranters and intercontinental chefs, though many of his secrets derive from local Italian communities, family and friends here in the States.

“I was raised in New Haven and Woodbridge until I was 10. As an adult, I’d drive through Stanford, Connecticut. There were so many pockets of Italian communities. In Jersey, too. I had the best dish of spaghetti and anchovies with garlic. It had to go into my cookbook. Eventually, I had so many napkins, ripped papers, menus, coupled with the recollection of family cooking and holiday traditions. Jean and I had dinner one night at The Washington Crossing Inn. The chef there was signing his cookbook, and Jean was so thrilled to have an autographed copy. Later, a good friend and business partner, Peter said, ‘You should write a cookbook.’ It was then that I realized that this is what I should do by design, so that I could share my love for great food with others. Love and laughter are found around a meal. Garnering the ingredients should be stress-free. List the key ingredients at the top of the recipe,” added John.

“There was no time for self, to be creative. I didn’t derive joy running companies all over the map. I was on planes constantly, away from home, off to Asia, Europe, the US, but I could never slow down. I was dealing with issues inside of a conference room, hangar or office, disconnected from people. As someone at the helm of so much, I was on a wheel you can’t get off, not gratifying…finally I had enough. I drove home to my wife, Jean (DiNello) Oliano, and shared my thoughts of selling the business, retiring. She was so supportive and we decided that the quality of our lives was too important. Jean came from 12 siblings, so she knew about busy, so we were ready to leave corporate America behind,” he recalls.

John once had a stint on QVC promoting his pizza baking kit. The product included dough mix, a baking screen, pizza cutter and serving tray. The kit also included an instructions booklet.

“It was more of a hobby, but it was surreal to be on television promoting one of the things I love to do,” he adds.

Perhaps the secret to a long life is buried with the longevity found in John’s ancestry. His grandparents lived to 106. Another close family member lived to be 103, and her sister to 98. Blame it on the garden vegetables in Benvento? In any case, there is something to be said for healthy Mediterranean cuisine, and cookbooks that lead to kitchens filled with fond memories and enduring traditions.