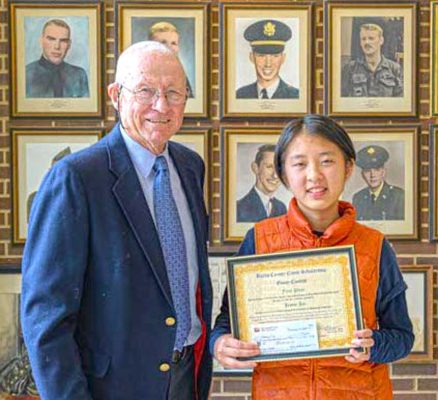 Jessie, a Council Rock North High School senior, was presented with a Certificate of Recognition and a $2,500 scholarship award. Council Rock North’s Assistant Principal Jennifer Bertagni joined Jesse for the presentation. In high school, Jessie enjoyed conducting research through Science Fair. She also promotes STEM by organizing STEM workshops as an officer for Education Equals Empowerment and as the president of the Science National Honor Society. Beyond science, she is passionate about music and plays the flute in band and viola in orchestra.

Her future plans are to major in biomedical engineering in college, though she is undecided about becoming a biomedical engineer or physician in the future. She hopes to contribute to the medical field by combining her interdisciplinary interests in the life sciences.

The second-place scholarship award of $1,000 and Certificate of Recognition was given to Hailey Morath. She had no prior knowledge of her award, and was joined by her parents and a number of members of the Conwell-Egan’s Faculty and Administration. Hailey took many STEM based courses throughout her high school career, along with some dual enrollment courses to get ahead on college credits.

She also received Academic First Honors all throughout my high school career and has been active in many extracurricular and community service activities including the Conwell-Egan Drama Spring and Fall Productions, Chamber Choir, All-Catholic Chorus, Acapella Club, Spirit Night, National Honor Society, and Danaher Lynch Family Foundation Scholar. She has applied to a number of colleges where she plans to study Marine Sciences and become an Oceanographer.

This civics contest grew out of a profound respect for the Constitution but concern that over the past 30 years, America has become a nation increasingly characterized by partisan political and social tribalism, a loss of confidence in and distrust of many of our nation’s most critically-important and historically-trusted institutions, a growing public perception our judicial system has becoming increasingly politicized along ideological lines, a latent distrust of local law enforcement agencies in many minority communities, evidence-based science on issues ranging from vaccine efficacy to the climate being ignored, calls for censorship and limitation of speech and, without any proof, where a large minority of Americans believe the 2020 presidential election was stolen.

This has resulted in large numbers of Americans, feeling alienated or threatened by evolving societal changes, willing to sacrifice our constitutional-based democracy at the altar of demagogic promises of “American First” and a revival of an imagined social past, and acceptance of violence to achieve democratically-unattainable goals … for those who have forgotten history … echoing fears and promises sold to millions of people throughout Europe during the 1920s and 1930s.

While the causes for our nation’s current political and cultural schisms are multifaceted, it is undeniable a significant majority of Americans on both the Right and Left seem to have lost sight of our nation’s founding ideals and are all too often ignorant about civics, American history and the bedrock of our democracy, the Constitution.

They have fallen into the mindset of watching or listening to media or consuming other information which justifies their preconceived and often misinformed views of the world … letting their opinions determine the facts they are willing to believe rather than letting facts shape their opinions … served up by self-serving politicians and talking heads for whom truth has given way to alternative facts and conspiracy theories for their own selfish ends of ratings, re-election or monetary gain. 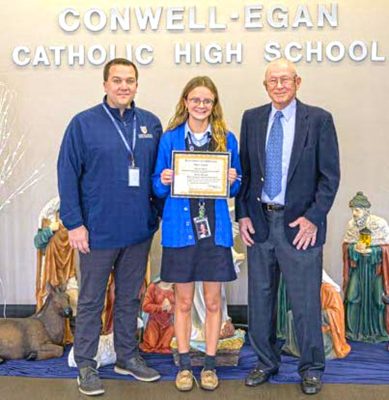 Believing today’s young adults represent our nation’s “future generations” of voters and political leaders, TheLegacyof1776.com and Courier Times teamed up in 2021 to sponsor a scholarship essay contest focusing on American Civics and knowledge of our Constitution.

This year’s students were challenged to write an essay answering the question; “Should the Constitution be interpreted based on a literal reading of the document’s original text (“originalism”) or viewed in the context of our nation’s evolving social, scientific and other changes since the time when it was written (a “living constitution”) and why?”

A panel of seven independent judges read and rated each of the submissions with their collective consensus determining the first and second place awardees.