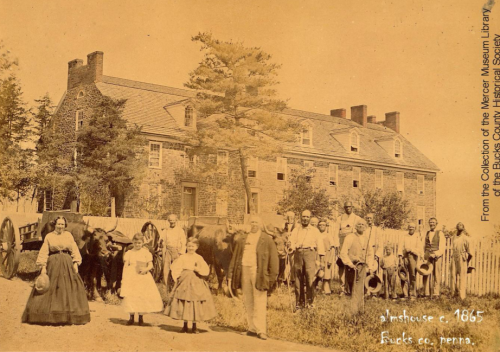 Philadelphia can indeed boast that Ben Franklin and the Marquis de Lafayette are part of their historic landscape. Thanks to preserved sites Graeme Park and Moland House, the pleasure is shared with Horsham and Warwick Townships. But who are the lesser-known persons whose stories are housed in our suburban libraries and museum collections?

The figure that captured the attention of Penn’s Woods Puppet Theater was Benjamin Jones, protagonist in Follow the Drinking Gourd. The Bucks County Historical Society’s information on “Big Ben” Jones was accessible and abundant. In 2012 researcher and scriptwriter, Deedie Gustavson, got started.

The play opens with a miniature Jones running through the woods across our upper stage. Behind him with lanterns and dogs are two slave catchers who fire and wound him. The curtain then rises to what will be Ben’s final stop on the Underground Railroad, the Buckingham home of abolitionists Hannah and Samuel Yerkes.  It is in this scene that we learn Ben’s tortured past.

The show debuted in Newtown in 2013 during the Civil War sesquicentennial. It went on to participate in historic site school programs and played to a full crowd at the 2016 Johnson House Juneteenth Celebration (Juneteenth 2017 was rained out. What a disappointment). Follow the Drinking Gourd was a huge success.

Penn’s Woods wasn’t alone in recounting Jones’s life. In 2013 a local effort brought together dollars, talent and movie expertise to produce the film The North Star. Shot in Buckingham Township and its environs, the movie had as its lead Eagles linebacker Jeremiah Trotter. Our puppet play, of course, had no such talent – but it didn’t cost us $600,000 either!

We recommend the article about its filming in the May 1st, 2013 issue of the Philadelphia Inquirer; it is a good read.