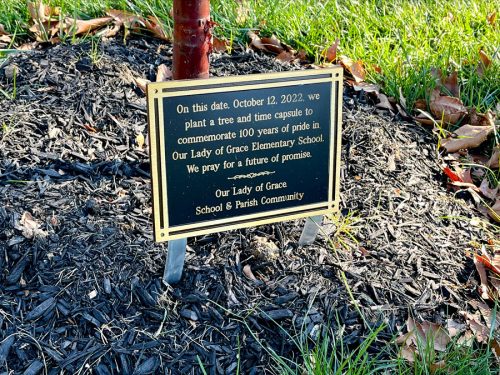 Our Lady of Grace (OLG) School is celebrating a century of life during the 2022-2023 school year, and plans a year-long celebration to honor 100 years of excellent Catholic education in Lower Bucks County. On September 8th, 1923, OLG opened its doors for the first time, with a staff made up of four Sister Servants of the Immaculate Heart of Mary.

OLG school welcomed 70 students between first through eighth grades in their inaugural year. The legacy of the school continued to grow, as well as the student body.

As the school approached its 25th anniversary in 1948, construction finally broke ground on the new school building. At this time, enrollment reached 320 students for the 1949-1950 school year, with an additional 150 students in the Christian Doctrine classes.

On October 2nd, 1949, His Excellency, Most Reverend Hugh L. Lamb, DD, VG laid the cornerstone and blessed the new parochial school building. The new two-story building included a cafeteria and spacious classrooms to accommodate the growing number of students. Enrollment in the parish school hit its peak in the early 1960’s when more than 1,000 students were enrolled. At that time, some classrooms had up to 61 students in them.

In October of 1997, the IHM sisters announced that it would be their last year teaching at the school due to the decreasing number of sisters left.

As class sizes grew smaller, the quality of education and community of family spirit remained. Today, OLG celebrates a century of pride and a future of promise.

Throughout the 2022-2023 school year, OLG plans to celebrate and reflect on the last 100 years with multiple upcoming events, including: Sharing Christmas with our Alumni on December 15th at 6:30pm, ‘Happy Birthday OLG’ Celebration on January 30th at 1:30pm, a Gala celebration on June 2nd, and a closing mass with the Bishop of Trenton on June 4th at 10:00am.

OLG invites the surrounding community to join the celebration throughout the year.

To learn more about Our Lady of Grace School or if you have questions regarding the 100-year celebration, please visit olgschoolpenndel.org or call 215-757-5287.

PHOTO CAP: During the month of October, OLG students prepared mementos which they buried in a time capsule on October 12th.  A tree was also planted to commemorate the occasion.