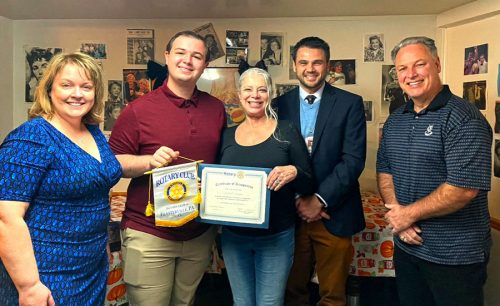 Michael Somogyi was recently honored by the Feasterville Rotary Club as Student of the Month for October. Michael lives in Feasterville with his parents, Ruthann Ault-Somogyi and Steven Somogyi; and he has a 20-year-old brother, Andrew. Michael has attended Neshaminy schools for 12 years, is ranked #5 in his class of 664, and carries a 4.56 GPA. He was introduced to the Rotary membership by Mr. Stephen Garstka, Principal of Neshaminy High School.

He volunteers his time for Rebuilding Together Philadelphia, Share Food (packaging and transporting) and makes dog toys.

Michael likes to play video and board games, spend time with his cats and solve physics problems with a classmate. After high school, he plans to attend a four-year college to study molecular biology and genetics. His career goal is to become a genetics and cancer researcher.