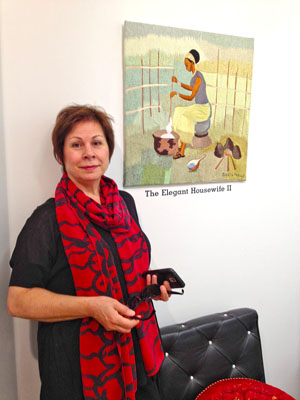 Juliana Meehan sits in her living room surrounded by what seems to be an unfinished mosaic, vibrant with color. She is actually encircled by a variety of lively embroideries ranging in size from 17″ x 20″ to 57″ x 51″. Some are mounted and some are lying gracefully in a colorful pile waiting to become so.

She is the curator for a completely unique collection of handmade Rwandan embroideries created by the female survivors from both sides of the 1994 genocide.* The women who began working together did so in order to survive in a new peace. Newer members continue the legacy of culture and the unique process that brands their stunning visuals.

Juliana is a middle school teacher who specializes in literacy and never imagined that she would be bringing these remarkable works of art to the United States. Three years ago she bought a condo in Fallsington, where she spends weekends and vacations, and will retire there permanently in the near future. Currently she is preparing the newest Rwandan arrivals for the next gallery showing.

It has been a long wait since Covid protocols closed most public gatherings. Her search for the next show is now possible and her anticipation is palpable. All new work arrives from Rwanda two to three times a year.

Gallery openings usually feature a welcoming reception where she shares the Rwandan experience that led to her curatorship. Juliana and her husband, John, went as tourists to Rwanda in 2010 to see the silverback gorillas, and to experience the rainforest and the savannah.

“But during the week we would stay in Kigali, Rwanda’s capital, where there are many shops. We stumbled on one called Mode Savane and went in. The embroideries immediately stood out. We admired those that were mounted and then discovered a box of finished but unmounted pieces in the back of the shop. I think I bought about eight on that first trip.”

Christiane Rwagatare (founder and owner) who also serves as director and designer, offered to show the Meehans how the works are made.

“So a few days hence we came back to the shop and Christiane was ready in her Jeep to take us up the mountain to see the ladies in action.”

The drive served to exhibit some of Rwanda’s diverse ecosystems. These include volcanic mountains where the gorillas live; the dry savanna with lions, elephants, and zebras; and one of the best medium-growth rainforests in Africa: Nyungwe National Park.

What Juliana saw when they arrived at the small workplace was a group of women working only by daylight but grateful for a chance to sell their work in Kigali. With Christiane at the center they also developed a support system.

The early days solidified the group’s intention to create more than napkins, hand towels, or pillowcases. Christiane would draw a design from cultural, natural, or traditional subjects and, depending on the size, the final product might be created by two or three different women working together and could take three months to finish.

The most exciting thing to me, viewing the embroideries close up, was the distinct technique of combining three different colors of thread on one needle to achieve a remarkable texture and shading. The technique is almost impossible to view in a photograph; you have to see it in person. Their work has by now won awards in Rwanda but is little known outside of the area.

Juliana asked Christiane, “What can I do for you?” Christiane answered, “Help us be seen in the United States.”

Juliana was as good as her word and since then she has mounted gallery showings at the Museum of African Art in Tenafly, NJ; The Textile Museum in Washington D.C.; The Puffin Foundation in Teaneck, NJ; the People’s Gallery at Port Authority in NYC; and the Mark Miller Gallery in Manhattan.

Selected pieces can be sold from a gallery showing with all of the profits going to the women for salaries and overhead.

Juliana adds, “I take no salary and I help to pay the postage because it’s expensive to ship internationally.”

She does the mounting herself once they reach her home, since the cost of the mounted weight would be prohibitive.

“There are some in the art world who would discount their work as ‘crafts.’ To them I say that these works require consummate skill and are rendered in an original technique.”

As I was about to leave Juliana’s home she said quietly, “This group of women are incredibly brave. They live in the shadow of the Genocide even now, many years hence, and have made peace with each other – some hail from the side of the perpetrators and others from the victims. They look to the future and to a better world for themselves and their children.”

A desire that we can all understand and share.

*The preferred name is the Genocide Against the Tutsi.