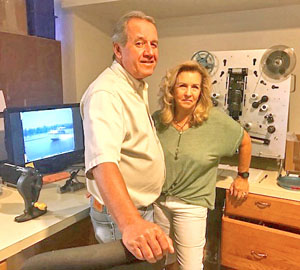 Tailor Made Film & Video Transfers began as a hobby in the garage-turned-studio of long-time Feasterville resident, Pete Wolk. Back in the early 1980s, Pete, an avid 8mm movie enthusiast, looked into getting his own home movies converted to a Betamax videotape and found that there were limited options.

Realizing this might be an opportunity, he researched equipment and technology for transferring film to videotapes and, in 1985, Pete began transferring film for friends and family. With the help and support of his wife, Donna, it soon developed into a side business. Word got out and local camera and video stores started using Tailor-Made as their trusted source for film to video transfers and business grew rapidly.

In 1988, they moved the business out of their garage and as word continued to spread through camera store networking groups it soon became necessary to ship orders out of state. In 1999, Pete and Donna purchased their current 2000SF location at 205 E. Pennsylvania Boulevard in the Feasterville Business Campus.

Staying at the forefront of technology by investing and reinvesting in the latest high-quality equipment and the work of the dedicated staff, account for the company’s remarkable success.

Over 35 years later, Tailor-Made continues to be a family run business and still operates in the Wolk family’s hometown of Feasterville – right in your backyard!

Visit Tailor Made film & video Transfers’ website at www.tmtransfers.com for pricing and information, or give them a call at 215-322-8444, Monday through Friday, 10:00am – 6:00pm. Look for the coupon in this paper for a discount!