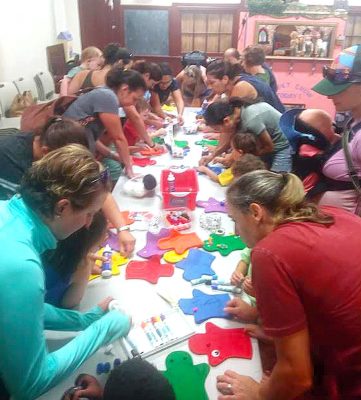 Early in the 50s WCAU-TV purchased some old cartoons with broadcast plans. A gentleman named Warren Wright was asked to host the yet unnamed program. But Mr. Wright had a better idea: have the host of the show be a puppet and make him part of the entertainment. Willie the Worm was chosen as MC and his pal, Newton the Mouse – whom we never see – ran the projector. Willie’s comments to Newton were very funny to a four-year old. I was addicted.

I had to have a Willie the Worm puppet. When looking for puppet-making materials, Mom’s sewing drawers seemed to be a good place to start. There were all sorts of possibilities, but the darning eggs were the most promising. Having an unsupervised childhood, I had most of one painted when my newfound hobby was discovered. It was decided by a higher authority that my puppet would be made from fabric sewn together with needle and thread.

It was the inspiration of a puppet show that led me to hands-on creativity, and I don’t think kids have changed at all; a Wrightstown library program convinced me of that. The first 30 minutes was our puppet show followed by a puppet-making activity. The joy and success of the puppet makers are captured in this photo. It was a “you-had-to-be-there” moment.

Interestingly enough, it wasn’t just the puppets the children were asking about. I had an “in-depth” discussion with a three-year-old on how the fire worked – noticeable because the room lights were low. How the spinning wheel turned was another query. Since the props were simply made, the explanations were understood.

One never knows what seeds one sows.