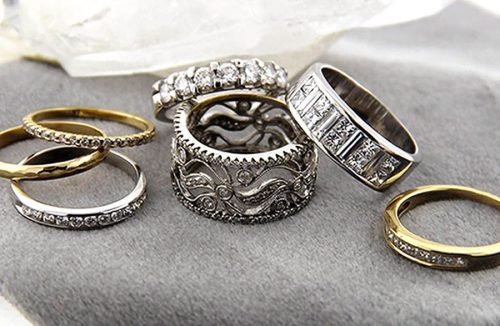 Getting married? Looking for the perfect wedding bands?

Did you know that wedding bands have been around since the time of the ancient Egyptians? At that time the bands were made from reeds. Later they began to be made of metal due to its durability and strength, perfect symbols for a couple’s commitment to each other.

Not until Roman times did the wearing of a band become customary as a public pledge to honor the marriage contract. Simple iron rings were worn as wedding bands until the medieval age when gold rings set with gemstones became fashionable.

The gems most commonly used were rubies with their red color symbolizing the heart, sapphires where the blue color reflected the heavens, and diamonds for their indestructibility. The word diamond actually comes from the Greek word “adamas” which means “the unconquerable.”

It was not always customary for both the bride and groom to receive rings. It was the Greek Orthodox that introduced the idea of wedding bands for grooms.

This custom did not come over to the United States until the beginning of World War II. During that time many couples got married in anticipation of their separation, before the men had to go off to war.

The bride and groom exchanged bands which became solace for the lonely soldiers and for the brides, reminders that their faraway soldier was thinking of them always. Dual ring ceremonies still continue to be the norm today in the United States.

Donegal Jewelers offers a wide variety of wedding bands in gold, silver, platinum, titanium and tungsten. Stop by to view the selection and find your perfect ring! Donegal Jewelers is located at 35 E. State Street in Doylestown. For more information call 215-348-3488 or visit donegaljewelers.com.