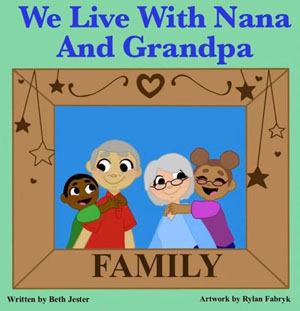 One phone call at night, and your life is changed forever. For Beth and John Jester of New Britain Township, that call came seven years ago from out of state. Someone close to their daughter and her partner informed them that if they did not come and pick up their two grandchildren, ages four months and two-and-a-half years, the children would be turned over to Children and Youth Services in that state. The couple got on a plane to pick up their grandchildren the next day.

“Our thoughts at the time were that these were our grandchildren and we needed to make sure they were safe, well cared for and not involved with a system in another state where we would have no rights to even know where they were placed by that state,” says Beth. “We just immediately made arrangements to get them and bring them back to Pennsylvania.”

Grandparents having to return to parenting is becoming less and less unusual.

Other reasons for ‘grand families,’ as they are called, are teen pregnancy, a parent incarcerated, child neglect or abuse, and military deployment.

Beth initially found the prospect of becoming a parent again, after thinking that was all behind her, overwhelming. “I was working at the time, and I had to leave my job,” she says. “I worked for a Bucks County nonprofit that advocates for those with mental health, substance abuse and intellectual disabilities. I loved my job.” Now that was all over, and Beth went from working adult in control of her life and her daily routine to full time nurturer, with changing diapers, bathing, napping, feeding, and bedtime rituals suddenly her new normal.

Today, the “grands,” as Beth and John call them, are seven and nine, and their lives are much like that of other children their age in elementary school. They spend their time playing with friends, going to birthday parties, playing sports, attending summer camp, joining in Scouts, and doing homework. Life is full for them. Their mother, the Jester’s daughter, has been back home living with her children and parents for the last two years, and is celebrating three years of sobriety.

“We Live With Nana And Grandpa,” written by Beth and illustrated by Rylan Fabryk came out in May. “I started on this writing journey several years ago when I was trying to find a book to help my grandkids understand our family. I was unable to do so.”  Because Beth couldn’t find a book about grand families, she decided to write one.

“We Live With Nana And Grandpa” is a story about families and how each family is unique. The children in the book, Sophia, and Aiden, are biracial, just like the Jester’s grandchildren. This fact, as well as being raised by their grandparents, makes them different from some of their friends.

On one page, Grandpa is taking a walk with the two children. It is shown with picture bubbles above them illustrating what different families may look like. Sophia’s and Aiden’s parents are absent from their home, but they do have visits with their mom.

The children in the book are like other children who are three and five. They go to school, have friends, have their favorite toys, take walks, ride their bikes, and are sometimes happy and sometimes sad.

Sophia and Aiden share their grandparents’ love through kisses, hugs, prayers, and bedtime stories as a part of their daily lives.

In short, this book celebrates the love in all families, however they many look from the outside.

“The statistics on grand families and other relatives raising the children of loved ones is staggering,” Beth says. Thrown into this novel situation seven years ago, Beth had searched and been unable to find ways to contact others in their position. This motivated her to establish the Bucks County Grand Families Support Group in 2019 with another grandmother she found at a speaking engagement. Beth has run the group alone for the past two years. “My hopes and prayers are to help children feel they are not alone, that families do look differently. And that’s fine.”

Bucks County Grand Families Support Group will meet this fall on Friday evenings on September 16th, and October 7th and 14th, from 6:30 to 8:30pm at Lenape Valley Church in New Britain. Meals and babysitting are offered at no cost to the families. Reservations are requested. Beth can be reached at bcgrandfamilies@gmail.com.