Other than a power-walk or a dog walk, we suburbanites rely primarily on our cars for local-motion. When you drive, there is so much to be missed, especially in a town like Morrisville, with stores, homes, sidewalks. I found this out one morning when I drove my car to Bear’s Auto Services on Bridge Street to get an oil change.

Bear’s has been in business since 1981, owned by Gerald Cutchineal.  At 8:30am I was greeted by Chris, who told me the oil change would take about an hour, and he suggested I grab a cup of coffee at the deli next door. It was a beautiful morning, and even though I live in a neighborhood along the Yardley-Morrisville “border,” the only places I frequent in Morrisville are the Garden Farm Market and Cunningham’s Hardware on Pennsylvania Avenue. So I decided to take advantage of a free hour and explore Delmorr Avenue – on foot.

Walking south, I first encounter a colorful mural underneath a highway bypass, with figures in the style of Keith Haring. Brightly colored dancers encircle the word L.o.v.e.  #trylovenow. On the left in dialogue bubbles are these words: “I pledge to LEARN about the people in my community.  To unconditionally OPEN MY HEART to their needs. As if they were all immediate family members, To VOLUNTEER to be part of the solution in their life.  On the right: “During both good and challenging times.  And to EMPOWER everyone I meet to do the same. As if our lives depended on each other.”  The bottom bubble on the right reads: “THE LOVE is THE ANSWER PLEDGE.”

The world globe is divided in half in a heart shape, one half on the left of the pledge and one half on the right – with the optimistic (presumably young) artists’ signatures below the right half.  I’m sure Morrisville residents could fill me in on the making of this wonderful mural.  As an outside observer, I simply take it in and marvel at this unexpected art find.

Next I happen upon an icon of American childhood, a Dairy Queen. It’s empty at this morning hour of course, but I’m sure it gets plenty of traffic on summer afternoons, evenings, and weekends. It’s a disappearing breed, as other ice cream and water ice franchises have moved in, but it’s still standing because nobody does a Reese’s® Peanut Butter Cups® Blizzard®  treat like Dairy Queen. 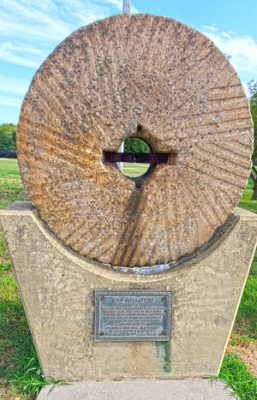 Since the sidewalk ends, I reverse course and walk north.  At the corner of Bridge Street and Delmorr Avenue I see what looks like, across from the point where I stand, a giant tree ring.  However, when I cross the streets and stand right next to it, I read the plaque and discover it’s an old millstone from 1773.  A mill, Morrisville’s first industry, was erected near this site by Adam Hoops, and later owned by Robert Morris and George Clymer, both signers of the Declaration of Independence and the Constitution.  This millstone monument was erected on the 150th anniversary of the borough of Morrisville, in 1934.

Just beyond the millstone is a gargantuan sycamore tree; I try to imagine how many kids it would take to encircle its trunk, a game I bet has been played by some of the children who play and watch softball just beyond – at the South Field of Williamson Park, Home of Morrisville Softball.

I see an hour has gone by – so much to notice in just 60 minutes – and I pick up my car. Heading north on Delmorr, I stop to photograph the water tower, painted blue with green fish, detailed in black and white, circling as if in one of those walk-around aquariums.

What really astonishes me is the small brick building opposite it, The Heritage Center, with a plaque that reads, “In Memoriam, Mayor Anthony Dominic, October 28, 1927-December 7, 1999. ‘Tony embodied the spirit, energy and future of our Heritage Center as he did the borough of Morrisville.’”

I observe that this is the home of ActorsNET of Bucks County’s theatre, now in its 26th season. A poster advertises the upcoming plays. To me, this is the biggest treasure find of my walkabout.  I plan to do more digging to find out about this theatre that I’m embarrassed to say I have never known about in the 20 years I have lived here!