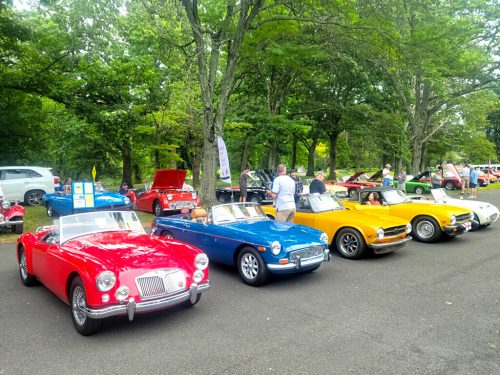 If you’re either a vintage car owner or a vintage car enthusiast, you might want to come to Bridge Street in Morrisville on October 1 for the Morrisville Business Association’s (MBA) Fall Car Show. With categories for both imported and American cars, spectators will be treated to an array of yesteryears MGB’s, Mustangs, Triumph’s, Corvettes, Jaguars, and others, and all arrayed in Bridge Street in their rebuilt and restored glory.

Like most organizations, the Morrisville Business Association was slowed by the Pandemic, but is fast becoming the town’s leading business organization. Under the new leadership of 3rd Ward Councilman Andrew Lubin. Lubin, along with Ms. Jane Burger, the MBA is actively promoting Morrisville’s businesses, and this show is their largest event since 2019.

Show categories for both American and imported cars are the same: Prior-to-1949, 1950-1959, 1960-1969, 1970-1979, 1980-present, plus Best-of-Show Imported and Best-of-Show American.  With Bridge Street closed between Delmorr Avenue to S. Pennsylvania Avenue, spectators can inspect the cars, chat with the owners, and purchase merchandise and food/drink from the participating MBA members.

Show times are 9am-1:30pm, with set-up and registration opening at 8a.m. Pre-registration and show management is being handled by Morrisville’s British Cars of Bucks County; see www.Britishcarsofbuckscounty.com to pre-register online.

Show your children and grandchildren the cars of our youth!