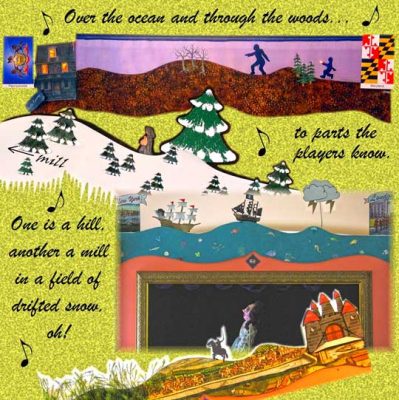 The nuts and bolts of puppetry stagecraft

Having a puppet appear to travel a long distance is a challenge for any puppet company.

Penn’s Woods met the challenge in Jack and the Beanstalk by using scenery printed on a shade. As the shade is pulled down, the barn and hillside slowly disappear below the proscenium with clouds following behind. Thus, Jack appears to be climbing up the beanstalk even though he is stationary on it. However, this is vertical distance.

Our dilemma was horizontal distance. One technique was a video of moving scenery using rear screen projection. The scenery moves across the background while the puppet is stationary, shifting his arms as though walking. But this was pricey.

The problem was solved when a script required William Franklin to sail to London. By attaching ocean waves to the top of the stage and using small figures to transit them, the illusion was created.

The next opportunity came when Lydia Darragh in The Walls Have Ears walked from Philadelphia to a mill in Frankfort in snow and wind. In Follow the Drinking Gourd we again employed the upper stage to have “Big Ben” Jones run through the woods from Maryland to Pennsylvania with slave catchers in hot pursuit.

Then fairy tales joined the repertoire. Jack runs across clouds and jumps down the collapsing beanstalk; in Rumpelstiltskin the page takes off on horseback across the hills into the forest; in Mr. Meeney and the Hot Air Balloon, the “airship” ascends the stage into the sky.

The drawback was that the curtain had to be down to conceal the standing puppeteer; action could not occur above and below simultaneously. The resolution was the addition of a black curtain four inches in from the proscenium arch. It concealed the standing puppeteer while allowing space to a full-sized puppet to perform at the same time.  Once in place, we saw the prospect of upper and lower stage characters interacting. To our delight, it worked.

Necessity truly is the Mother of Invention. Robin and Susan Tafel  215-441-4154   https://www.Youtube.com/user/PennsWoodsPuppets.

PHOTO CAP: Getting the most from a box puppet stage