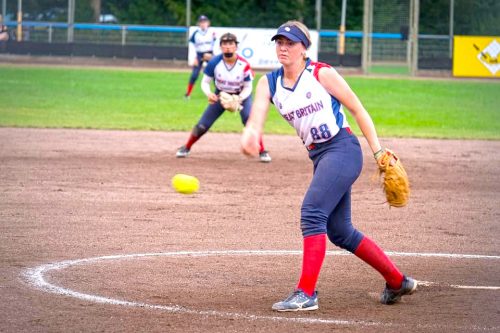 At age 14, Jenna Thompson has already had the experience of a lifetime. The incoming Pennsbury freshman and Lower Makefield resident has recently returned from a trip to the Netherlands, where she spent two weeks training and subsequently playing for Great Britain in the U-15 European national softball championships.

A pitcher, she led the tourney in strikeouts with 37. She also hit the most home runs with three and tied for the most stolen bases with six.

Her local softball team is the Pennsbury Gems, where she plays shortstop, second base and the outfield.

“My primary position is shortstop, so pitching for Great Britain was something new and it was intimidating at first,” Jenna said. “I’m not normally a pitcher. I spent about four days working on it and I got pretty good.

“I always wanted to be a pitcher but because I play two sports (she also plays soccer) I don’t have the time to do pitching lessons. Pitching styles are very different and you can do different things. It was interesting.”

It was her first trip abroad to play softball, but she had previously traveled to England to play soccer.

“That experience definitely helped me,” she said. “We didn’t really have much contact with our parents. You’re in a room with a teammate. We had our own little bubble. That was the same with soccer so I knew what to expect.”

She met the team in the host country, the Netherlands, where they had a week of practice before the tournament began.

“That was a good chance for me to get to know everyone on the team,” she said. “The best part was seeing how different everyone is and making friends that I can keep for my whole life. The coaching staff was so sweet and nice and helpful. The whole thing was amazing.”

The tournament was not without controversy. The British Softball Federation made a clerical error and the full roster was not accurately registered by the competition deadline. Following discussions with the World Baseball Softball Confederation Europe, the governing body of the tournament, the team was able to play all games as scheduled, but in the official standings lost each game by forfeit and automatically finished ninth.

This was a setback for the program, which has aspirations of qualifying for the 2028 Los Angeles Summer Olympics.

“For me it was upsetting that we couldn’t place and make a good mark for ourselves but it didn’t really matter when we were playing the games,” Jenna said. “We played like the mattered. It was just more about the experience and being there and making new friends.

“I still talk to some of the girls on the Italian team. It was definitely more about being there and enjoying that time. I would love to keep going with Great Britain. The dream is to be in the Olympics.”

Jenna has dual citizenship in both the United States and Great Britain.

“My dad is from England and because of that I’m eligible for dual citizenship,” Jenna said. “I have a British passport so that’s how I was able to play for Great Britain.”

Her father, Stephen Thompson, is the assistant girls soccer coach at Pennsbury.

Jenna is entering her freshman year at Pennsbury. While at Pennwood Middle School, she played volleyball and basketball and ran track in addition to her primary sports.

“I really enjoy playing sports,” she said. “I’ve been playing softball since I was four and soccer since I was three. I love both equally and I have a lot of commitment to both.”

Jenna realizes there will come a time when she will have to choose between the sports, but that time is not now.

“I’m looking forward to seeing how it plays out,” she said. “But whatever happens, I think the things I’m learning in sports will help me become successful in my career.”