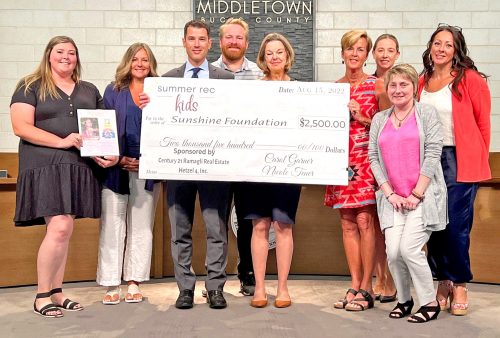 What started as a penny drive, encouraging the campers to collect pennies became an amazing effort to “Spread Sunshine.” A fun and exciting car wash took place that raised more funding than was expected and the campers had a blast while doing good in the community. They also hosted a Sunshine table at the Township’s National Night Out.

Money raised will help answer the dream of Savannah, age 3, who is diagnosed with low-functioning autism, global delays, and is non-verbal. She is one of five special needs children in her family. Savannah’s mom told us “Savannah dreams of visiting Disney World and the Peppa Pig Theme Park in Central Florida with her family because she loves watching Mickey, Minnie and Peppa Pig.”

Sunshine Foundation answers the dreams of children, ages three through 18, who have severe or profound physical/developmental/intellectual challenges or trauma from physical/sexual abuse, and whose families have limited income; life-long conditions such as spina bifida, cerebral palsy, severe low functioning autism, Down syndrome, hydrocephalus, severe epilepsy, Sickle Cell Disease, blindness, deafness, and many others.

These are children who may be turned away from other wish-granting organizations that require a life-threatening or critical diagnosis. Sunshine Foundation is the original wish-granting organization in the United States, founded in 1976 by Philadelphia police officer, Bill Sample. Sunshine Foundation has spread Sunshine into the lives of more than 41,600 children over the last 46 years.

Sunshine Foundation is a publicly-funded charity, with donations from individuals, corporate and family foundation grants, donor advised funds, trusts and wills, fundraising events; including ones held on their behalf by all-volunteer chapters of the Sunshine Foundation, individual families, corporate and civic groups, and even former Dream recipient families “paying it forward.”

For more information on how to refer a child or to make a donation, please visit www.sunshinefoundation.org.