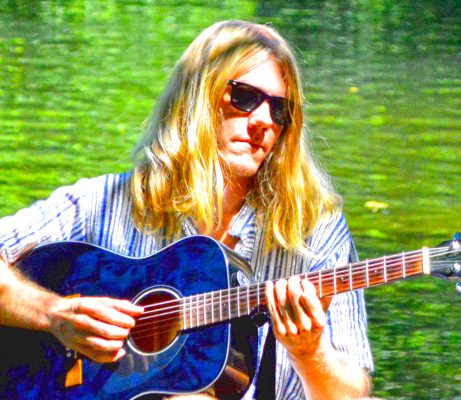 At 31, Jay Johnson may be a millennial, but his mindset is definitely that of a ‘60s child – clearly discernible in his uplifting first solo album, “Four Quartets.” Born in California, he moved to Yardley in third grade and played violin in fourth grade at

Quarry Hill Elementary School. By fifth grade, he was already teaching himself guitar on a Takamine Jasmine acoustic his parents gave him. His mother played classical guitar, his father played acoustic guitar and piano.

Jay’s music roots go even deeper. To his paternal grandfather, who went by the name of Johnny Johnston. Originally from Sweden, he traveled around this country playing jazz. And to his maternal grandfather who was in the Polish Underground and came to the United States after World War II. He was a multi-instrumentalist, playing the violin, accordion, mandolin, and organ. Jay remembers the giant organ in his grandparents’ home in Napa, California. “I knew I wanted to do this [music] in some capacity,” says Jay. In fifth grade he wrote his first song, “Sunrise,” which he still likes to this day.

By high school, Jay started jamming with friends on his cross-country team. His academics at Penn State’s Schreyer Honors College, where he studied History and Ancient Classics & Mediterranean Studies, with minors in German and International Studies, took him on a path of global travel that further developed his music sensibility. He fondly remembers a semester abroad at the Athens Center, with a group of students from Penn State and the University of Wisconsin.

“We would jam all the time and write sing-alongs. Music is a big part of the [Greek] culture. People would eat dinner, then the guitars and bouzoukis (Grecian-style lutes) would come out and they would just play.” Jay bought his classical guitar there, using Sharpies to decorate it with scenes of Greece. “It still has some sand in it from the island of Crete and I shake it sometimes.”

The following summer Jay worked on an archaeological excavation at the Ismenion Hill in Thebes. He saved up enough money to buy a bouzouki then. In Rome, Jay bought an accordion. He’s been gifted shakers and a coconut shell pick from a reggae band in Utah.

Twenty instruments are currently what he relies on for the various sonic landscapes in Four Quartets, which is a quartet of four EPs on the themes of In Nature, In Transit, In Change, and In Love. Listen for the bouzouki in “Arcadian Life” and “Bristlecone Meditation.” You’ll hear the accordion in “Stuck,” a Jew’s harp in “Through the Storm.” “Love Song,” Jay’s personal favorite “because it’s so positive,” uses a zither. “My goal was to make it sound like a musical hug. I feel like people are going through so much…what if I could make a song that could be romantic…familial…platonic or spiritual – just try to make something that everyone would get something out of.”

Like so many musicians, Jay penned his solo album during the Covid pandemic as a solace both for himself and his listeners. With the lyrics, “one of my goals is to set a scene then back out. Each phrase is generally abstract with multiple meanings. I really like that from psychedelic rock or mysticism.” Some of his favorite bands – the Beatles, Kinks, and CSNY – are clear influences.

“Part of why I like to make music is because I really like the idea of spreading peace and love, flower power,” says Jay. “Yes, I am a ‘60s child…I’m terrified of some of the things that are happening around the world today. It’s probably a little naïve, but I fundamentally believe you can fight back with peace, love, and happiness.”

When he performs live, Jay experiences sheer joy, which people say he exudes onstage. Besides his solo career, he performs on Tuesdays at the Trenton Social, an open-mic/jam session. He backs solo performers with the band Over the Counter, a collective organized by drummer Alex Westlein and bass player Tobias Richardson. Jay also plays with Three Yards to Dover, with James Bischoff, a close friend since fourth grade. They’ll release an EP in the fall and perform at South Philly’s Sausage Fest on September 17th.

Jay plays bass with the country-western-themed rock-and-roll band, Mandy Valentine, fresh off four months of performances around Philadelphia. “We wear cowboy hats and boots, but I can’t find a pair in my size 16.” They’re planning a winter tour, with a single, “Oh Baby,” out in the fall and an album to follow.

Jay’s always busy writing, currently working on two albums with Over the Counter in mind. As for the Philly music scene, Jay considers it one of the best in the country. He’s lived here for six years, yet he knows eventually he’ll “get the urge to return to my home out West.”