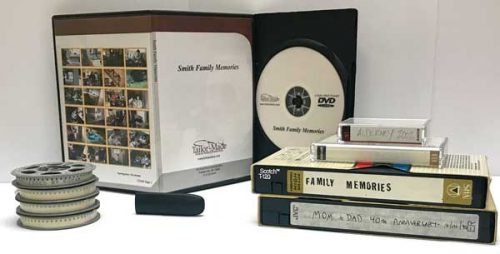 If you have old reels of movie film in the attic packed in iconic yellow Kodak boxes, they’re probably Regular 8 or Super 8 film. Each 3-inch reel contains about 50 feet of film, good for approximately 3 to 4 minutes of viewing.  The good news is film is a pretty sturdy medium, so old home movies on 8mm, 16mm, or Super 8 reels are likely to be in decent shape. It’s time to have them digitally preserved.

You could mail your film to an on-line Google advertiser over 700 miles away and take your chances, or you can bring your film reels to a local business whose expertise provides film and videotape transfer services for Camera Stores and One-Hour photo processing stores, Universities, Hospitals, Film Archivists and Government Agencies, Nationwide!  See discount coupon in this paper.

Family owned and operated, Tailor-Made treats every order like the “one of a kind” precious memory that it is. By far, DVD is still the most requested format, however, Tailor Made provides an additional digital format (at no additional charge!), MP4 files that you can put on a flash drive. They “future-proof” your investment!  MP4 files on a flash drive can be plugged in and viewed on a Smart TV, backed up on your computer, archived on a cloud service and shared with family and friends.

In 1983 Sony released the first consumer camcorder that used a small Betamax cassette tape and gave consumers instant access to their recordings. As tape formats increased through the ’80s and ’90s, consumers had many video formats to choose from. Tape is considered ‘at-risk media’ because it’s vulnerable to deterioration, and the technology you can view it on is starting to disappear. As with, movie film transfers, Tailor-Made will provide DVDs and MP4 files of all your videotape formats.