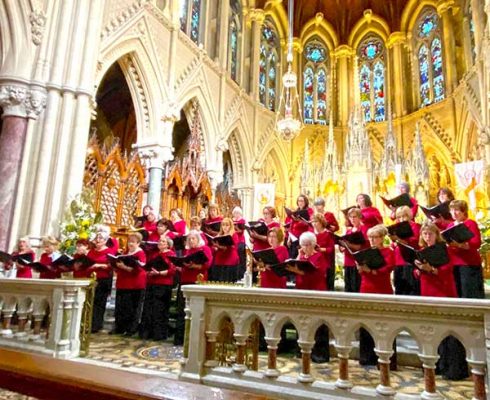 Anxious to travel again after the pandemic waylaid it’s 2020 performance tour to Greece just four weeks before they were scheduled to depart, 38 members of the Bucks County Women’s Chorus along with spouses and other companions landed in Dublin on May 1st for eight days of music-making and sightseeing.

According to Artistic Director Patricia (Pat) Guth, the trip was a much anticipated one for the ensemble, which had grown accustomed to touring every two years, and despite a resurgence of Covid-19 cases at home, the tour was a successful one, she notes. About half of the 80-voice choir signed up for the trip as soon as it was announced in January 2021, Pat explained, adding that many of those who came to Ireland had not traveled with the ensemble previously though a number of singers were veterans of these frequent tours, which have taken the choir to Italy, Hungary, Austria, Sweden, Estonia, and Finland.

The chorus performed three times during the trip: in Cobh, Balbriggan (a suburb of Dublin), and Belfast. In addition, the ensemble sang for the Lord Mayor of Dublin and presented other impromptu performances along the way. In between those concerts, the travelers explored the cities and countrysides, enjoyed an Irish dance class with a former member of the Riverdance ensemble, took a cooking class with a local TV chef, and visited museums and other attractions.

“It was an amazing tour in an incredibly beautiful country,” Pat exclaims. “After two years of very little travel, our ensemble and their guests enjoyed a week of music, camaraderie, great food, and fun.”

The chorus also had the opportunity to meet and perform with a number of local musicians including the Douglas Harmonia Singers of County Cork and the Balbriggan Gospel Choir. In addition, the choir participated in a workshop at the Irish Institute of Music and Song.

Members of the chorus, which celebrated its 10th anniversary this year, are already thinking about their 2024 journey, though the destination hasn’t yet been decided. In the meantime, the ensemble will be adding to the list of the more than 100 local concerts they’ve presented in the last 10 years. Interested singers who’d like to learn more about Bucks County Women’s Chorus are welcome to visit the choir’s website at www.buckscountywomenschorus.com, where they can find information about registration and more.