Ava and Jayne, both rising seniors, and teammate Brynn, rising sophomore, competed and placed first in the state of Pennsylvania for Sports and Entertainment Management at the FBLA-SLC (State Leadership Conference) in Hershey in April. Jackson, also a rising senior, competed in Agribusiness and placed fourth at states. The students earned the chance to compete at Nationals with their high scores.

The four students traveled to Chicago for the NLC to compete with 350 winners from Pennsylvania and over 12,000 students across the US and Canada. 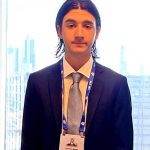