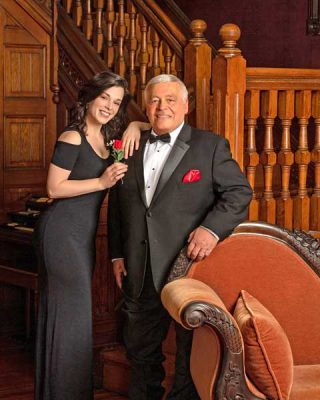 To benefit a local non-profit organization

Local Catholic radio personality and entertainer, Jim Manfredonia, will be presenting an evening of the “Songs of Sinatra” on September 24th at 7:00pm at the Notre Dame High School Theater in Lawrenceville, NJ in a benefit concert for the local non-profit organization, Domestic Church Media, based in Ewing, NJ.

Opening the show will be Manfredonia’s daughter, Angela, who will be singing songs made famous by Judy Garland, Liza Minnelli and others. They will be backed up by the 19-piece Summer Swing Orchestra. Jim has been singing this style of music for many years. He is quick to note, though, that he does not present himself as a Frank Sinatra impersonator, but rather, “just an Italian crooner from New Jersey who loves to sing his songs.” Angela Manfredonia is a professional singer from New York City with a powerful voice and a vocal range that is very similar to Garland, Minnelli and others of that era. Backing up the singers will be The Summer Swing Orchestra, a 19-piece Big Band from Hunterdon County. “We have all of Sinatra’s original band arrangements, so the audience will immediately recognize most of the songs that he made famous just by the intros”, Jim said, “and we hope that people will come, leave the worries of the world behind, and for a couple of hours sit back and enjoy fine, live music from simpler times.”

Notre Dame High School Theater is located at 601 Lawrence Road in Lawrenceville, NJ. Tickets are $45, $35 and $25, and all proceeds will go to support Domestic Church Media, a non-profit organization that owns and operates four Catholic radio stations in New Jersey. For more information and to purchase tickets, visit www.DomesticChurchMedia.org/2022-benefit-concert.

PHOTO CAP: Jim Manfredonia will present an evening of “The Songs of Sinatra”.  Opening the show will be his daughter, Angela, who will sing songs made famous by Judy Garland, Liza Minnelli and others.