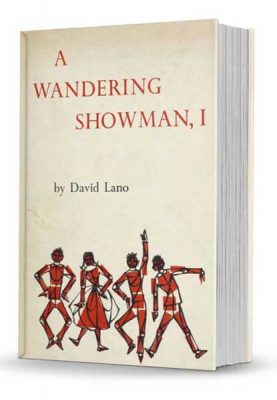 David Lano, traveling puppeteer, in his own words. Part 2 of 2

Jones was going on to a pumpkin fair, but we were not going with him. We went back over the trail to the Kickapoo Indian Sagwa show of Tom Warfield. He was carrying two families of Indians and an eccentric comedian. We slept at a hotel. The Indians slept in the hall rented for the show.

That night one of the bucks slipped up to my room, knocked on the door and made me understand that down at the hall someone wanted badly to see me. It was pretty late, but I dressed to go out and went down to the hall, and there were the two girls from the Night Hawk troupe – the pair who had won my wife’s friendship.

“We ran away from Night Hawk,” they said. “Will you hide us for a few days? We’re afraid.”

I smuggled the two of them up to my room. I turned them over to Mrs. Lano, telling her to find out where they came from so we could, if possible, help them.

The two girls’ story was that they had joined Night Hawk’s bunch for excitement. After a day or two they said they had been auctioned off to the “lucky members” of the troupe. The girls realized what it meant, but constant threats prevented them from getting away. As is usual in such cases, the worst had happened to both of them.

They wanted desperately to get home, but all the clothing they had was the western stuff Night Hawk made his gang wear; it was a dead giveaway on the street. We managed to get them dresses. They gave their western clothes to the Indians.

One night later that week, the Night Hawk gang came storming into town looking for the two girls, but of course, nobody had seen them.

The gang rode off, disgruntled and sore, and determined to continue the hunt. In the pitch-blackness of night, we escorted the two tearful girls out of town, bought them each a railroad ticket to some place in Pennsylvania, and gave each a dollar. We never heard from them again.