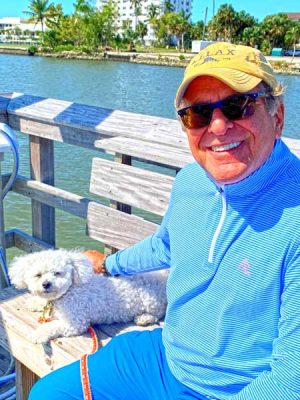 James Pagliaro, a volunteer worker at Pennsbury Manor in Morrisville and a committee member of the Pennsbury Society, was recently selected as one from among 27 individuals who were named “Volunteers of the Year” for their contributions of time, talent, and expertise in 2020 and 2021 by the Pennsylvania Historical & Museum Commission (PHMC).

Staff volunteer coordinator at Pennsbury Manor, Zachary Long, in his nomination essay for James, stated in part, “Since becoming a volunteer in 2016, Jim has become an integral part if the Pennsbury family. Starting as a school tour and walk-in guide Jim continues to delight visitors with his knowledge… In 2019, Jim was asked to join the Board of Directors for the Pennsbury Society and to spearhead a new fundraising committee. As the 2020 pandemic set in Jim, along with his fellow committee members sprang into action.

To help off-set lost school tour income Jim proposed a fund matching campaign for education. Jim and his wife, Susan, would match every dollar raised up to $17,500. We reached that goal in part to Jim’s tireless effort in soliciting donations and ultimately surpassed it by $ 10,000. Early in 2021 Jim lead a search which would bring a new development and marketing professional to the site. In the summer of 2021, Jim became the voice the Pennsbury Manor’s new cell phone tour and has agreed to expand the recordings as necessary!”

Since its beginning, PHMC has depended on citizen volunteers to work in partnership with its dedicated paid staff to carry out the preservation and interpretation programs of the agency. An award ceremony was held in April at the State Museum in Harrisburg for James and the 26 other volunteer awardees.