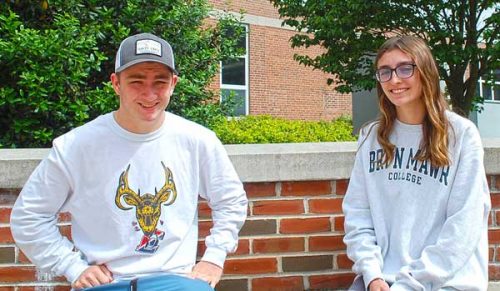 On May 25th, two graduating seniors each received $1,000 from the Central Bucks-Central Bucks High School West Hall of Fame Committee (CBW HOF) at the school’s annual awards ceremony, this year by a virtual resource.

Henry Hunt, CB West Athletic Director and HOF Board Member presented the scholarships to Jill Hohmann of Doylestown and Michael Long of Chalfont. The students were selected on the merits of their essays on the role of athletics in their lives.

As the winners of HOF’s essay contest, each graduate will use the award toward their college expenses. This was HOF’s 17th annual scholarship award to an outstanding male and female athlete upon their graduation.

Jill Hohmann competed in Tennis, a sport where the individual opponent’s skill level is often unequal. When she reached high school, the competition brought winning matches.

She writes, “Over the years I’ve learned that losing can be viewed as an acquires skill. … every match is a learning experience. Tennis has taught me the most important thing to change is your mindset.”

Jill will enter Bryn Mawr College in the fall. Michael Long competed in Lacrosse, starting at West in his Junior year.

Hoping to play Lacrosse at Immaculata University in Immaculata Pennsylvania, he writes, “Coach Coverdale is always talking about culture ties and West has a deep-rooted tradition of being successful in many sports…and I truly think it’s more than us athletes and coaches, and the support we give each other and that the community gives us.”

The Hall of Fame was established for the purpose of recognizing CB-CB High School West Alumni whose athletic participation resulted in exemplary and record-holding accomplishments. The 21st Hall of Fame Induction ceremony is scheduled for Saturday, October 15th.

For more information on the Hall of Fame, visit the organization’s website at www.cbwhalloffame.com.