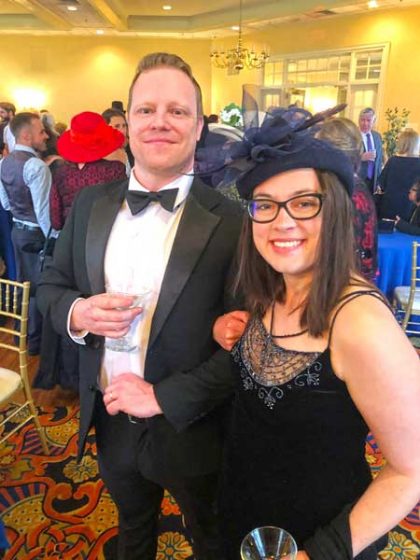 Local residents and Titanic enthusiasts gathered together on Saturday, April 9th at the Spring Mill Manor in Ivyland at Johnsville Centrifuge & Science Museum’s Gala to honor the 110th anniversary of the Titanic’s tragic sinking.

In a night of remembrance, renowned Titanic expert and artifacts collector Craig Sopin displayed some of his collection, including a sword from one of the sailors onboard, the printed initial inquiry into the disaster, a cribbage board, sheet music and an authentic photo from 1912. Craig also presented to the audience while they enjoyed a seven-course meal themed after the Final First-Class Dinner on the Titanic.

The Titanic was sailing on its maiden voyage from Southampton (England) to New York in April of 1912 when it struck an iceberg and sank; the “unsinkable” ship went down and took 1500 souls with it. While today we look back at the tragedy with a sort of morbid fascination, this was a moving event to honor all the lives lost but still remembered.

A silent auction, including some Titanic artifacts and collector items, went on through the evening with some hot and heavy bid wars. Auction items included a handmade three-foot model of the Titanic, a ceramic replica of the dinner menu, a 1996 lithograph of the Titanic with a 1912 coin commemorating the ship, and original photographs by Steve Rigby of the shipwreck.

The evening began with a cash bar, featuring special drinks such as “Gin and Titonic,” while a string quartet played period music. Once dinner began, the crowd redirected into the Grand Ballroom for white-glove table service and courses including Consommé Olga, Poached Salmon, Petit Hen, Beef Sirloin with Roast Potatoes and Creamed Carrots, an Intermezzo of Punch Romaine, Cold Asparagus Vinaigrette, and dessert including Waldorf Pudding, Eclairs and Peaches in Chartreuse.

All proceeds went to Johnsville Centrifuge & Science Museum. The evening was a roaring success. Nearly every attendee was dressed for the part, including some from “steerage,” and many ladies in hoops skirts and 1920s regalia. It truly was a night to remember.