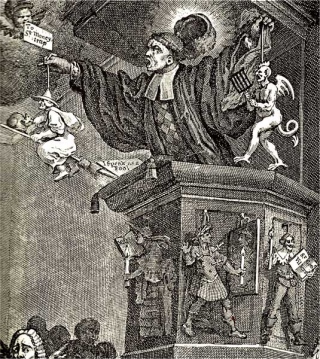 In 17th century Europe, marionettes, once tools of religious instruction, had a change of fate: puppet plays were banned, and puppets publicly burned. Their new genre of comedy and crudeness brought about these events. But in Britain it wasn’t puppet shows that government considered a problem; it was live stage performances.

During Britain’s religious upheaval, Oliver Cromwell established what the Puritans demanded – a stricter moral code; theaters must be closed! Puppet plays, however, were still tolerated; in fact, they flourished as an alternate amusement, even attracting gentry. Charles II, upon seeing Punchinello perform, gave the puppeteer a medal in appreciation; puppetry was gaining wide acceptance. But in the 18th century, satire – not morality – was the issue.

By 1737, George II had had it with stage plays’ assault on the monarchy. King George showed his intolerance with the Licensing Act. It cracked down on theaters and playwrights that had shifted their themes to governmental mockery and vitriol against members of Parliament, especially Robert Walpole.

The law required that scripts be submitted to the government at least two weeks before its performance. Not doing so would draw a penalty of £50 and the closing of the theater.

But puppet shows were exempt. The Court regarded them as harmless, appealing only to the lowest classes; their audiences were “lazy, lousy-looking, a hateful throng of beggarly, sluttish strumpets”.

Too bad George didn’t realize that his entertainment-starved citizens (“polite society” included) would soon swell the audiences of puppet theaters.

It wasn’t long before out-of-work actors flipped over as puppeteers, and respected playwrights like Joseph Addison and satirist Henry Fielding wrote puppet plays. They wanted to do what legitimate theater could no longer do – lampoon the establishment. It wasn’t just Mr. Punch making the wise cracks now. Something had to change.

Changes started in 1738 with restrictions placed on the “Artificial Company of Comedians in the Hay-market” whose master was, of course, “Mr. Punch”.

Appearing in the May issue of the Gentleman’s Quarterly was Punch’s plea to the “Worshipful Licensers of the Stage”. He begged “as a fervent Christian and obedient citizen who never acted on Sundays” that they not further limit his performances.

His petition, he said, was necessitated by a letter threatening to turn his body “into Tobacco-Stoppers” if he acted on Wednesdays and Fridays during Lent. Punch, as the readers knew, was a puppet.