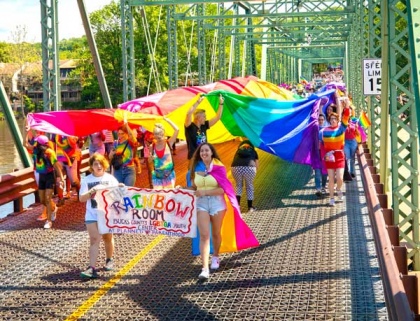 New Hope Celebrates presents PrideFest on May 20th through May 22nd.

This year’s theme “Dancing in the Streets” gives everyone a chance to dance and swing to their favorite entertainers.

The Annual Parade will kick off rain or shine on Saturday May 21st at 11:00am in Lambertville, crossing the bridge to New Hope.

Following the Pride Parade, the Pride Fair will be held in the American Legion parking lot, on the corner of New Street and South Main Street in New Hope.

PrideFest LIVE entertainment will start at 1:00pm until 4:00pm. With a vast array of talent, there is something for everyone.

The Doylestown School of Rock is the world’s largest music school. They will be showcasing their students’ talents on stage. Also performing are Stephanie Chin Band, known for her haunting soulful melodies and her new R & B release Vision of Us and the indie pop trio BETTY who have traveled the world impowering women, girls, and the LGBTQ+ community with their music and performance.

New Jersey’s own Hot Squirrel Highway will entertain you with their mix of blues, folk, and rock. Also appearing will be singer, songwriter, and producer Sug Daniels.

With her combination of folk and R & B she strives to bring messages of positive change to her audience. Toby Chernesky, also hailing from New Jersey, will be singing everything from show tunes to disco.

Besides singing, she plays football in the New York Gay Football league. Ballet fans will not want to miss the Roxey Ballet with their innovative dance performance.

The Pride Fair will also have food vendors and merchants. There is a suggested $5 entrance fee with proceeds benefiting New Hope Celebrates and future Pride events.

PHOTO CAP: New Hope Celebrates Pride is back live in 2022 and everyone will be “Dancing in the Streets”, May 20-22.