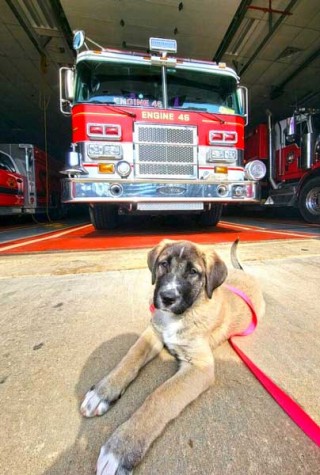 The New Hope Eagle Fire Department, the oldest fire company in Bucks County, will celebrate 200 years of service to the community this June with a parade on June 11th at 11:00am, a 5K Dash for the Axe on June 12th at 10:00am, held in partnership with the New Hope Historical Society, and an Open House on June 16th from 6:00 to 9:00pm.

Over the years, the fire station has continued to evolve to where they are today, a company that encompasses 12 square miles and serves more than 15,000 residents in New Hope Borough and Solebury Township and provides fire protection, vehicle rescue, water/land search/rescue, primary hazardous materials response, as well as 24 hour, seven days a week medical emergency service.

During Hurricane Sandy, the firehouse Banquet Hall was a designated evacuation center, and volunteers fed and sheltered over 200 people.

Some rescues prove more difficult than others, like Eagle Firehouse’s swift water rescue during Hurricane Irene when the company responded to nine-year-old triplets, their grandparents and the family dog, all trapped in a home surrounded by quickly rising flood waters that threatened to carry the house away. The initial team was able to get to the house, but realized that with the water rising so quickly, they now could not evacuate the same way they had entered. Luckily, another team was able to rig up a rope rescue system. Working together, the two teams brought one person at a time safely across the floodwaters, including the dog. Everyone got out safely and the teams went immediately on to another rescue call.

Not all rescues are of two-footed creatures. The four-footed and the winged need help sometimes too. A gray parrot had been missing for days when the owner finally spotted it 40 feet up in a tree. She called the Fire Department. The fire crew member was already up a ladder when the bird flew away, only to be rescued later safely on the ground.

Not all firefighters’ services are serious. They also operate Breakfast With Santa and the Santa Run where Old Saint Nick stands atop a firetruck waving to local residents. A similar event is held with the Easter Bunny and for the Graduation Parade.

The newest member of the Eagle team is three-month-old Reikah, an Anatolian Shepherd. She will be in training in the next few months to serve as a Tracking and Trailing dog. These dogs are by far the most utilized of all search and rescue animals. They are able to follow the odor of a human over great distances and various terrains, such as grass, gravel, concrete, asphalt, and wooded areas. They are most frequently brought in to locate missing children and adults, and Alzheimer’s patients.

President Claire E. Shaw says, “It is an honor to celebrate 200 years and speaks to the dedication of our community. We look back at all the members who have devoted their time and risked so much for their neighbors. Our desire is to continue our support as an all-volunteer department for the next hundred years!”

Eagle Fire Company welcomes untrained volunteers and will work with them to get the required training free of charge. They have multiple positions available from Fire Police, Swift Water Rescue, to Fully Certified Interior Firefighter, as well as apparatus operator/driver.

As Claire points out, “We can only keep our firehouse going if people continue to knock on our door and ask, “How can I help?”

PHOTO CAP: The newest member of the Eagle team is three-month-old Reikah, an Anatolian Shepherd.