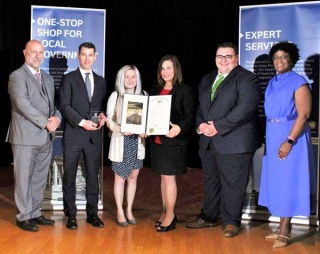 On Wednesday, April 13th, Middletown Township accepted the 2022 Governor’s Award for Local Government Excellence in Innovative Planning and Sound Land Use Practices at the State Museum of Pennsylvania in Harrisburg.

The Township received this award in recognition of its ongoing sustainability planning efforts.

Each year, one week is designated by the PA legislature as “Local Government Week,” honoring the dedication of Pennsylvania’s local officials and encouraging citizens to learn how local government functions and affects each resident and business in the community.

“We’re proud to be a leader in sustainability, not only in our region but in our Commonwealth,” said Middletown Township Board Chairperson Mike Ksiazek. “We humbly accept this award for our efforts so far, though our work has just begun.”

In doing so, Middletown Township became the first township in southeastern Pennsylvania and first municipality in Bucks County to adopt such a plan.

The mission of the Middletown Township Local Climate Action Plan is to create an environmentally friendly future that improves the quality of life by promoting environmental sustainability to residents, businesses, and the community.

“Local governments have an important role to play in an issue that many might see as transcending far beyond our bounds,” said Middletown Township Board Vice Chairperson Anna Payne. “Action on every level of government matters now more than ever.”