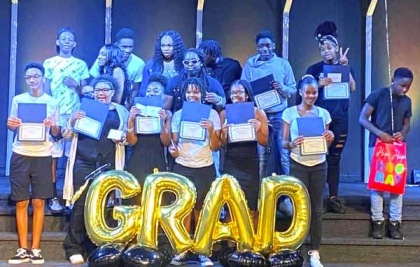 The Bristol-based Freedom Neighborhood One (FNO) non-profit organization has been awarded $25,000 – the maximum amount allotted to an agency of its size – out of Governor Wolf’s $15.7 million grant toward gun violence intervention and prevention.

Keevon Johnson is president and one of the eight working board members, all born and raised in Lower Bucks County, who wrote the application for this grant.

In the last eight weeks of the program that occurred last spring, students were asked to devise an implementation plan; that resulted in their production of a PSA video in which the youth ambassadors explain what they learned from the program, or how it changed them, and how they plan to implement what they’ve learned.

A testimonial video was also created, in which each student recited the name of a teenager who lost his or her life to gun violence; this is followed by several students stating what positive actions can be done to promote a peaceful climate (links to these videos are posted at the end of the article).

Last year the program took place at FNO’s community center. This year FNO will partner with Harry S. Truman High School in Bristol Township to create an after-school Youth Ambassadors cohort, or semester, of 20 teenagers. They have already been identified by the school’s social workers as young people who have an interest in and show a commitment to this endeavor. Parents will also be involved in a component of the program to ensure its success.

Keevon would like to see the program eventually fit into a designated time during the school day, such as a social justice or leadership class, so that it does not interfere with students’ participation in school sports or after-school employment obligations.

An important feature of the grant is that each youth ambassador will receive a $200 stipend upon completion of the 16-week program. Keevon envisions an alumni arm: youth ambassadors/peers mediators from the cohort will be invited to join the Ambassadors Alumni Network, which will be FNO’s continued engagement mechanism for youth-led initiatives.

“What we would like to do is hire some of the alumni to help us as facilitators and coaches with the next cohort, because we believe this program [will be best] peer-led. There will be adults present who are mentors, but peers connect…with peers a little bit better than they will with adults.”

He also points out that the funding allows FNO to hire data analysts who will be using testimonies and evaluating retention in the program.

Pre- and post-tests will be used to gather information: the pre-test indicates the knowledge the students already have regarding issues relevant to the program; the post-test will measure whether they have grasped and retained the information they were taught.

The goal is that they will then teach their peers the tangible non-violent conflict-resolution skills they have mastered.

Excepted outcomes for the Youth Ambassadors program are to: improve employability of participating youth; improve their ability to view another person’s point of view; increase their communication, problem-solving, and critical thinking skills, while enabling them to pursue their academics. FNO hopes to positively affect school climate and reduce violent conflict within the school.

“I do believe that our young people have some solutions…there needs to be more funding allocated to gun-violence research, employment opportunities…helping young people in the community heal from trauma, creating a culture of safety in terms of gun violence,” says Keevon.

“I think it’s key: teaching young people at an early age how to resolve conflict.”

He points out that the Youth Ambassadors program also keeps teenagers off the street during the times when a lot of violence happens.

He also is excited about the wellness component of the program. “A lot of our teenagers are struggling in terms of their…being able to bounce back and be resilient after something so traumatic as the pandemic. Vice president of FNO, Brittany McClain, is a licensed therapist clinician, and Keevon is in his last year of finishing a master’s degree in clinical counseling.

FNO was originally established in 2012 as part of the Weed and Seed Initiative, a national project designed to eliminate negative elements and encourage positive growth.

In 2019, when the Weed and Seed initiative was phased out, FNO became a non-profit agency with its current working eight-member board. On average, FNO services 400 people a year through its workshops, Grab ‘n’ Go Meals, its Youth Ambassadors program, and a summer camp known as Rescue Squad, which helps students earn their needed credits.