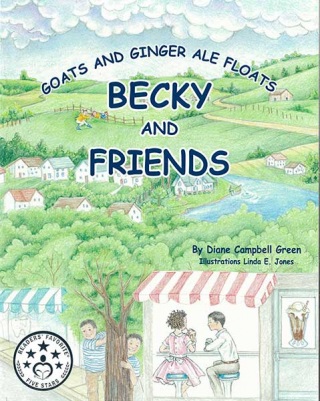 Diane Campbell Green has written “Goats and Ginger Ale Floats” – the third book in her “Becky and Friends” children’s series. It begins on New Year’s Day, 1962, a year after “The Sparkling Adventures of Becky and Friends.”

Subsequent chapters recount amusing events that occur during later months in that year. Diane grew up in Yardley, and many of the stories are inspired by her own childhood.

Even though it’s just a year later, it’s obvious Becky, now nine-years-old and in the third grade, is starting to mature; but she’s still as mischievous and clever as ever.

For the elementary-age school children who read this book, Diane posts on the last page, a list of signs of growing up – lessons derived from each of the chapters – just in case they miss the subtle messages within the text.

Like the previous books, “Goats and Ginger Ale Floats” contains ideal stories for families to read aloud and discuss, or just laugh at the misadventures of Becky Chalmers and her six-year-old identical twin brothers.

A map of Yardley circa 1962 precedes Chapter One, identifying public spaces and stores that still exist and some that do not, plus the location of houses where Becky’s family and other characters live.

They offer free, unbiased reviews from regular readers. Diane Green’s books are available through her website, www.dcgbooks.com, and currently the books are on sale. “Goats and Ginger Ale Floats,” and the fourth book, “I’d Rather Be a Kid, Signed Becky Chalmers,” are only available via the website.