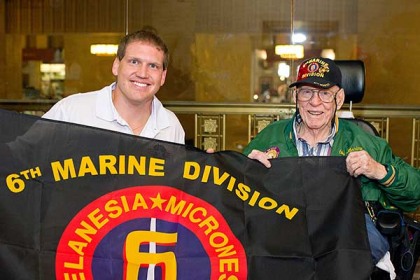 Twilight Wish Foundation, a national nonprofit headquartered in Bucks County, has announced that Peter Stinson, a resident of Doylestown, has been appointed Executive Director.

Stinson, a graduate of St. Joseph’s University, brings many years of nonprofit experience to the position.

Most recently, he was Executive Director of Greater Harleysville and North Penn Senior Services, a nonprofit that operates two senior adult activity centers in Montgomery County.

Prior to that, Peter was the Senior Director with Operation Homefront, a national military veteran’s organization where he oversaw operations throughout the Northeast for over 10 years.

It was during his tenure at Operation Homefront that Peter first learned of Twilight Wish while taking part in a wish granting for a World War II veteran who wished to attend the reunion of the Sixth Marine Division one more time.

James Hall, who was 85 at the time of his wish granting, saw combat in the South Pacific in the Battle of Okinawa where he was severely injured.

His wish was granted in September of 2012.

“Taking part in this wish really inspired me to want to serve further with Twilight Wish,” said Peter. “Twilight Wish has been making a difference in seniors’ lives for over 18 years and I’m thrilled to be a part of it.”

Peter volunteered his services on the Executive Committee for Delaware Valley Veterans Consortium, an organization that unites military and veteran service organizations for a four-year term which ended on November 30th.

In addition, he has taught CCD to seventh and eighth graders at Our Lady of Mount Carmel for over 14 years.

Twilight Wish Foundation is a national nonprofit charitable organization whose mission is to honor and enrich the lives of deserving elders through wish granting celebrations that connect generations.

Since its founding in 2003, Twilight Wish has granted over 4,552 individual wishes to seniors throughout the U.S.

Twilight Wish grants wishes to seniors who are 65 and older or a permanent resident of a nursing home and earn less than 200% of poverty level.

If you would like to nominate a deserving senior or get involved with Twilight Wish, visit www.twilightwish.org or call 215-230-8777 ext. 104.