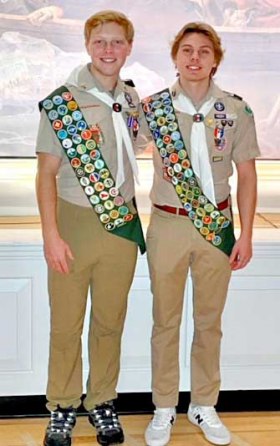 Boy Scouts of America Troop 29, based in Newtown, held an Eagle Scout Court of Honor for two new Scouts in their nest on January 29th in the Visitor Center Auditorium at Washington Crossing State Park.

John Brady Burgfechtel, of Washington Crossing, and David Peter Kunz, of Newtown, were joined by family, friends, and troop members in bearing witness to their achievement.

In Brady’s prepared remarks he noted, “Achieving Scout’s highest honor has allowed me to reflect on the countless hours and miles I have put forth for my troop and the continuous dedication and persistence I have put into myself to achieve this honor.”

“During my journey to obtain Eagle Scout, I completed an 82-foot brick paver walkway, with the elderly and disabled in mind, at the Washington Crossing Historic Park in Washington Crossing, PA. Organizing sponsorships and fundraisers to cover the expenses of the project gave me exposure to project management. From understanding the materials I needed to buy, equipment I needed to rent and each layer that needed to be spread to ensure the walkway would be there for years to come. I couldn’t have done this without the support of my project sponsors. I also am grateful for my project coaches: David Kunz, Sr., Jim Burke, my dad, and Troop 29 with their efforts and help to successfully complete this job.”

“Growing up through Scouting, I was taught important core values that have shaped who I am today.

I speak through my actions every day through give-back services. As a Scout, I am actively engaged and participate in many Scout service projects and clean-up efforts. A program I have coordinated and led the past four years is Snow Angels, which aids the elderly in the surrounding communities during winter months. Most recently, I coordinated and led a volunteer effort for my Eagle Scout Project – restoring sections of the Pennsylvania Appalachian Trail, cleaning debris and graffiti, widening and marking trails and establishing a registered camp site for thru-hikers. I am a firm believer of “leave-no-trace,” and given so, I am committed to maintaining this clean-up effort annually.”

“Like Scouting, climbing had an equal part in my shaping, not only physically, but in mental toughness, critical thinking and problem solving. I first touched the wall at seven, and ever since have been climbing competitively on the USA Youth National circuit. Over the past 10 years, I have learned what it means to be truly dedicated, exhausting my free time to train and building finger strength.”