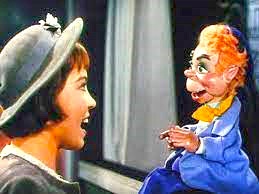 The first place that comes to mind for these conversations is the classroom. There was a very successful effort to teach the history of the Harlem Renaissance to elementary students. They were first tasked with selecting a character from the period, and then creating a 4’ puppet to represent him.

Puppeteers engaged with the project had the kids start their puppet by stapling upper and lower edges of a stiff paper plate to the top of a 4’ furring strip; this formed the face and body. A 2’ furring strip was placed below the plate for the shoulders. Now for the fun!

The kids painted the plate and drew eyes & nose. For the mouth they were instructed to pull a rubber band taut and staple it at each end to the paper plate; this created the lips.

A long length of fishing line was tied to the lower lip so when pulled the puppet appeared to be speaking. With hat and clothes and some with hair, Cab Calloway, Fats Waller, Adelaide Hall et al. came to life. The child became the character. Conversations were spontaneous. Puppets told their stories to other puppets who returned the favor. Parades through hallways expanded their exposure. The learning was exponential. The idea is simple and effective. It can be applied to any historical era.

But don’t count us adults out. Speaking to your dolls? You’re not crazy, they’re listening. It’s a way of working things out.

A fine example is the 1953 film Lili starring Leslie Caron and Mel Ferrer. Lili, our 16-year-old heroine, works in a carnival. She is infatuated with the handsome Marcus the Magnificent.

When Lili passes the puppet booth on her way to watch his magic act she always stops to converse with the puppets – but dismisses Paul, the crippled puppeteer.

Paul loves Lili; could she ever feel the same way towards him? This is a job for a puppet. Marguerite warns Lili of the designs of the secretly-married, womanizing magician.

He doesn’t love her; there is someone else she is meant to be with. It’s the outspoken Carrot Top who brings Paul and Lili together. Puppets aside, it’s a great film!