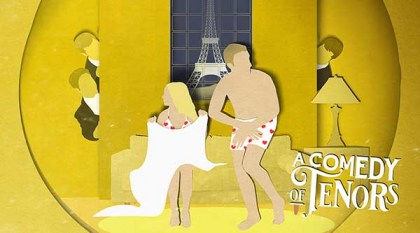 Brings laughter to the stage with Ken Ludwig’s A Comedy of Tenors, March 8th-27th

Bristol Riverside Theatre (120 Radcliffe Street) thaws out this spring with big laughs in the hilarious A Comedy of Tenors by Ken Ludwig, one of America’s most prolific and successful comedy writers.

It’s a whirlwind of misunderstands, mistaken identity, and unabashed hilarity.

One hotel suite, four tenors, two wives, three girlfriends, and a soccer stadium filled with screaming fans. What could possibly go wrong? It’s 1930s Paris and the stage is set for the concert of the century – as long as producer Henry Saunders can keep the amorous Italian superstar Tito Merelli and his hot-blooded wife Maria from causing runaway chaos.

Opening Night is Thursday, March 10th at 7:30pm. Tickets start at $43 with discounts available for students and military.

A limited number of $10 tickets are available for Bristol Township residents courtesy of Flager & Associates, PC.

For this show, audience members must show proof of vaccination or a negative COVID-19 test (PCR or Antigen) taken within 48 hours of the performance start time. In addition, masks must be worn while not eating or drinking.