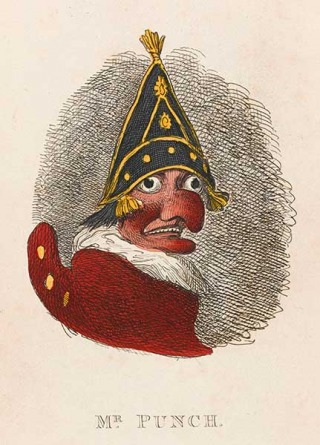 Punch was first seen not as a puppet, but rather a hook-nosed, masked character in commedia dell’arte, a style of theater whose roots were in Naples and Venice. It flourished from the early Renaissance until the end of the seventeenth century and differed greatly from theater as we know it today.

There were no written scripts. Action was moved forward by actors with improvised dialogue and agreed upon entrances and exits. The plots were familiar and characters always the same. The four main characters were masked. Their extemporaneous speech included remarks on current events adjusted according to audience reaction.

It was not uncommon to have a character tease a spectator – much to the delight of the crowd. The more crude and obscene the greater the laughter; that character became Pulcinella.

Pulcinella arrived in London in 1577 and became Punchinello. Many Shakespearian fools emanate from him. By 1662 he had become the puppet character “Mr. Punch”.

In the early years of the eighteenth century he was apotheosized by Martin Powell with the opening of Punch’s Opera. This puppet character was so popular that Powell found himself playing to disappointed crowds when he tried to rival Her Majesty’s Theatre with a more serious repertoire. No Punch? Realizing Punch’s appeal, Powell had him make cameo appearances in many performances. There was a roar of laughter when Punch appeared on the deck of the Ark in The Creation of the World!

Martin Powell’s death in 1729 by no means meant the end of Mr. Punch. News of Punch’s destruction by a dog at Southwark Fair was important enough to be noted in the 22 December 1738 issue of the Virginia Gazette. In 1742 a Punch and Judy show was performed here in Philadelphia.

Punch’s transformation from marionette to hand-puppet is uncertain. But we do know that “Captain Punch” was a hand-puppet when he became a naturalized New Englander at a Dartmouth show around 1800.