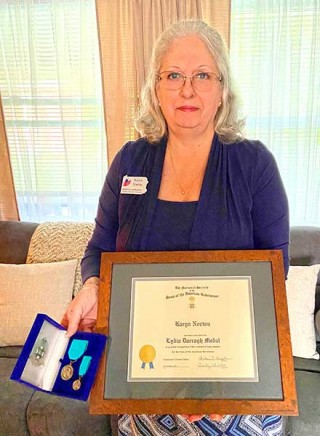 The Washington Crossing Chapter Sons of the American Revolution (SAR) recognized Karyn Norton, of Levittown, at the chapter’s October 12th dinner meeting for her outstanding service to the SAR. Karyn is a member of the Margaret Gayle Thornton Chapter of the Daughters of the American Revolution (DAR), serving as that chapter’s National Defense Committee Co-chair. Karyn was awarded the Lydia Darragh Medal by SAR Chapter President William Hampton for working behind the scenes to support SAR programs. This medal is named after Lydia Darragh (1729-1789), who crossed British lines in December 1777 during the British occupation of Philadelphia, to deliver information to George Washington that saved Washington’s army from an attack.

Karyn maintains the Washington Crossing Chapter’s Facebook page since its inception, posting stories on a regular basis. She keeps the page active and relevant. She has also planned and coordinated the annual DAR/SAR Flag Day picnic on the grounds of the Moland House for many years.

At the meeting, the guest speaker was local historian and author William L. (Larry) Kidder. Mr. Kidder gave a presentation about life for civilians living in Princeton, New Jersey during the Revolution, 1774-1783. His newest book is titled “Revolutionary Princeton 1774-1783: The Biography of an American Town in the Heart of a Civil War.”