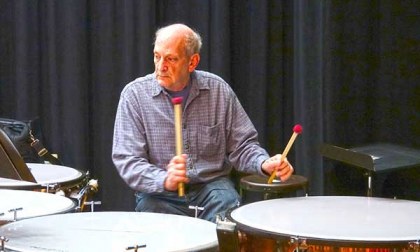 The next time you are at a Delaware Valley Wind Symphony (DVWS) concert, take a close look at the musicians on stage! One of them might be your doctor, accountant, or teacher. Principal timpanist, Ray Kirsch, recently retired from a 30-year dental practice.

His love of music began in fourth grade, when the music teacher asked who wanted to play the drums? Overcoming his shyness, he quickly raised his hand and began his musical journey. While at dental school, he took lessons from a timpanist who had defected from the Czech Republic!

Later, after a 15-year break, he returned to music when a patient told him about the DVWS. “I love music,” Kirsch explained, “It keeps me sharp.” Kirsch is not alone. Every musician on the DVWS stage has a story to tell. Tuba player, Bob Clark, recently retired from a career in accounting. His backstory in music began when as a toddler, his mother played him recordings of the musical story, “Tubby the Tuba.”

Although he studied trumpet in grade school, he soon switched to his old favorite, the tuba! “I could play a Bb scale the first time I picked it up,” he said. “Music is in my blood.”

Principal trumpet, and professional musician, Bob McNally, spent his childhood surrounded by musicians of the highest caliber. In fourth grade, he studied music with his father, euphonium soloist and Phil Smith, trumpet soloist, both with the NYC Salvation Army Band.

When asked whether it was challenging to practice for lessons with such accomplished musicians he responded with confidence, “I exceeded expectations!”

He practiced four hours every day, starting before school, running home to practice during lunch and again after school. Asked why music continues to be at the center of his life he sighed, “It’s my first love!”  DVWS musicians may come from all walks of life, but they share a passion for making beautiful music for their audiences to enjoy.

Join the DVWS for their annual Holiday Concert on December 12th, at 4:00pm at Holland Middle School! Learn more at delvalwinds.org.