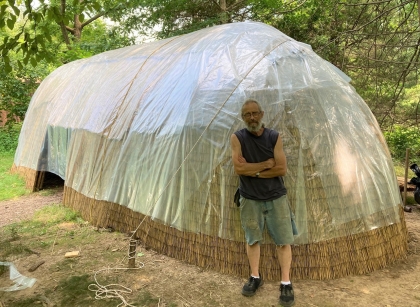 Churchville Nature Center has a long tradition of recognizing one volunteer each year who has gone over and above to help the non-profit organization carry out its mission.

Throughout the public health crisis, the Lenape Village, a circa 1500s replica Native American Village, was closed because schools were not able to go on field trips.

The closure allowed time to repair the longhouse structure that needed repairs and roof replacement.

David Head of Hatboro, a volunteer at Churchville Nature Center for 30 years, immediately began the process of renovating the longhouse in between working on his own house.  David wanted to keep the traditional look of the longhouse and honor the Native American way of using saplings for a strong framework and slowly adding sinew roping.

David worked independently well into spring of 2021, but realized the project was going to require some additional support to complete the project before the new school year in fall 2021. David began training other volunteers to help him stitch the sections of matting together by hand.

It is a labor-intensive job and David patiently trained many students and adult volunteers throughout the summer to help restore the longhouse structure.

In late August all the improvements to the longhouse were completed – just in time to welcome back the busloads of students who were thrilled to return and learn about the Lenape people and their way of life before European colonization. David was honored at an afternoon reception on December 14th at the nature center.

The longhouse is part of educational programming for 7,000 students each year who travel to Churchville Nature Center to learn about the lives of Native Americans.

The center is guided by its mission to instill an awareness and appreciation of the natural world in all people through education, and to encourage responsible environmental stewardship with a commitment to the preservation of resources and wildlife habitat.

Visit www.churchvillenaturecenter.org to learn more and follow them on social media.

PHOTO CAP: David Head in front of the longhouse just before placing the final layers of matting in July and August 2021. 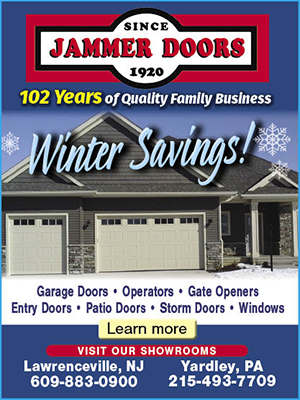