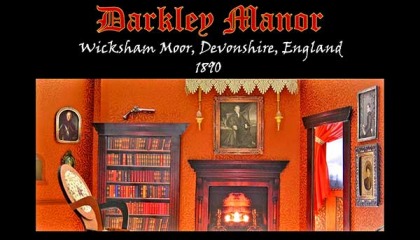 On the playbill is written: “most enjoyable to those over thirteen”. A puppet show not written for children? That must be something new.

Actually, it’s very old – but forgotten. Not that they don’t exist today, they certainly do, but the subject matter is much different.

When Martin Powell opened Punch’s Opera in London in 1709 his productions included classical legends, Scripture stories and parodies on contemporary society. His stage and scenery were elaborate. There were four sets of wings and three bridges – one bridge between each set.

Puppeteers operated the large puppets from the first bridge, the medium sized from the second, and the smallest from the third. Shows ran two plus hours. They were cheaper than live theater. Why? One puppeteer could do the work of three actors – five if the characters weren’t on stage at the same time. Actors hated puppet plays; they were pulling audiences away from legitimate theater – and their benches were full.*

Unlike Punch’s Opera, Penn’s Woods is a traveling theater – not brick-and-mortar as Mr. Powell’s. Ours has a proscenium arch 16 inches high – not two stories as Mr. Powell’s.

Penn’s Woods uses rod puppets – not marionettes as Mr. Powell’s. Plus, Darkley Manor has a runtime of 45-minutes – not two hours as Mr. Powell’s. But the TLC (time, labor & cash) put into our performances is the one thing we do have in common.

Darkley Manor employs theatrical scenery, special effects and a lighting design that has us appreciate the work put into a live theater performance.

It was developed for indoor venues such as libraries, museums, art centers and senior residences. Its runtime with post-show questions and a backstage tour is an hour.