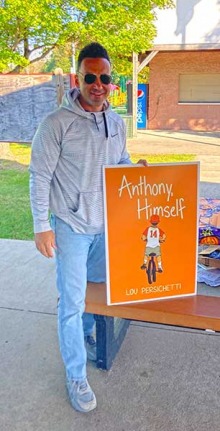 Informed by the notion of “nothing in life is guaranteed” and to “expect the unexpected,” Lou Persichetti, of New Hope, recently self-published his first children’s novel, entitled Anthony, Himself.

Named after Lou’s young son, the main character Anthony loosely mirrors some of Lou’s own experiences in young adulthood, geared toward readers in grades four through eight (but right now becoming a hit with college students).

Lou has taught fourth grade in Bristol Borough School District for nearly 18 years, so when he set out to complete his lifelong dream of writing a book, it was natural for him to write for the audience he’s most familiar with. “It was easy to let it flow,” he says.

The book tells the story of a young high schooler who has just started summer vacation and is desperately trying to impress his crush – a tale as old as time, but Lou puts a unique spin on this yarn.

Lou’s fresh writing style allows young readers to connect with Anthony as he navigates the trials of young love, as well as the deeper trials of family illness and fear in the face of solemn issues.

The story is told in mostly stream of consciousness form from Anthony’s (nicknamed ‘Ant’ by his friends) point of view, first detailing his attempts to please his mom on the first day of summer while torn between wanting to hang with his friends, and then his plan to convince his crush to become his girlfriend, “all in the name of love.”

The mother-son relationship is an enduring focus throughout the novel, and this mirrors Lou’s own life and relationship with his mother, who was (just like Anthony’s mother – spoiler alert!) diagnosed with cancer.

Lou was older at the time of his loss than Anthony is in the novel, but he felt it was important to incorporate this as a real-life experience for Anthony to navigate.

“My original intent was just to write a book, but then I realized who this could help – kids who are going through situations with parents who are diagnosed with cancer,” Lou said.

When Anthony’s mother is diagnosed, Anthony turns to a higher power, searching for deeper meaning in life. In a vein reminiscent of Judy Blume’s Are You There God? It’s Me, Margaret, Lou writes toward the end, “God, ya there?… it’s me again, Anthony, himself, checking in.”

This aspect of the book has set Lou on another mission, to help others and continue giving.

He is donating 50% of all proceeds from Anthony, Himself to the American Cancer Society. “I think that’s what it’s all about,” he says. “It’s better to give and feels better when I’m helping or giving.”

Most recently, Lou attended the Relay for Life of Fairless Hills event on October 17th, where he set up a table and sold books. He hopes to continue doing events such as this, spreading awareness as well as a lasting message of hope.

“I’ve learned over time, [life] is not always a happy ending and it won’t always go how you planned,” says Lou. “It’s more so how you react and your mindset.”

Lou lost his mom when he was age 28. Now at 41, he is still coming to terms with the loss, and the absence of his father who he lost just before Covid.

“I have kids now, but when you sit and think about it, something triggers in your mind,” Lou says. “I don’t have my mom or dad here to go see.”

One thing is sure: his parents would be proud to see what Lou has accomplished.

Raising two young children with his wife, Lou and his family recently moved to New Hope last summer, but Lou grew up in Bristol Borough and will continue to teach there.

“It’s where I grew up and where my roots are; that’s where my heart will be,” Lou says of Bristol. He and his family are excited to settle into New Hope, and Lou plans to continue writing Anthony’s story.

He is excited to see it finally published, having worked on each aspect from formatting the text to designing the cover.

Expect a sequel to come soon, following along with Anthony’s tales of love, life and family.

“[I hope this book] will help others,” says Lou.

A copy of Anthony, Himself can be purchased on Amazon.