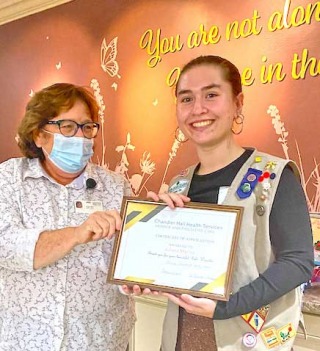 Juliana is the daughter of Debbie Marino, CRNP, a nurse practitioner at Chandler Hall and one of Marino’s “parent helpers” for her project, and wanted to help community members in the Hospice Pavilion where her mother works. After a conversation with the Hospice team on what she could do to help the residents, Juliana, along with a team of five volunteers, created 55 interchangeable wreaths on nine rings in different shapes, sizes and with various decorations. Each wreath celebrates a different time of the year, including Thanksgiving or summer, or a milestone, such as a birthday. The wreaths were hung on residents’ doors and in the campus’ offices to brighten spirits and potentially help residents with terminal illness recall old memories.

“We called them RELIC wreaths to stand for ‘Rings of Everlasting Life that Inspire Personal Comfort,’” said Juliana. “This stemmed from the Quaker Values that Chandler Hall is built upon.” 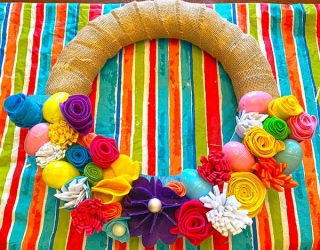 The RELIC wreaths were unveiled during Chandler Hall’s open house in mid-October, where the head of the Girl Scouts of Eastern Pennsylvania was in attendance to view the impact Juliana’s project had on residents and staff. The following day, after a presentation on her work, Juliana was notified that she would receive the Girl Scout Gold Award in a ceremony this spring. The Gold Award is the highest award an ambassador Girl Scout member can receive. It is given to those who help members of their community solve a specific problem they are facing through charitable work with the help of additional volunteers under the honoree’s leadership. The award is given to only 5.4% of eligible Girl Scout members.

“My goal was to bring comfort and joy to residents of Chandler Hall,” said Juliana. “Watching the smiles on their faces when they saw the wreaths made the whole experience so rewarding.”

Juliana and her father, Martin Marino, her other parent helper and a craftsman who helped her create the wreaths, also worked to ensure that the final product was reusable and could be easily fixed by staff so that current and future residents could continue to enjoy the wreaths for years to come.

“We are proud of Juliana for taking the initiative to donate her time and talents to our community,” said Chandler Hall CEO, John Whitman. “We are guided by our values in everything we do here at Chandler Hall. Juliana, through her generosity and dedication, is a great representative of this spirit.”

Chandler Hall’s mission is to support individuals in all aspects of living: physical, emotional, cognitive and social. Residents and participants at Chandler Hall are empowered to make choices whenever they are able. For more information on Chandler Hall, visit www.ch.kendal.org.