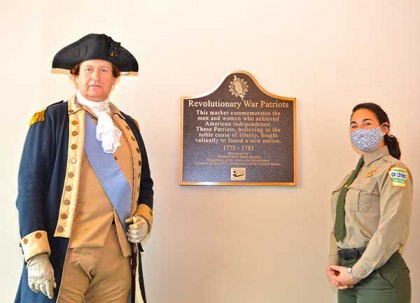 At the event, Pennsylvania DAR State Regent Elizabeth Watkins unveiled and dedicated a DAR America 250! Patriots Marker as part of a national DAR project to raise public awareness about the men and women who achieved American independence.

The National Society DAR hopes to place at least one marker in every state in advance of the upcoming 250th anniversary of the United States.

Washington Crossing Historic Park is a Pennsylvania state park that commemorates General George Washington’s crossing of the Delaware River on Christmas night 1776, widely recognized by historians as a bold move that turned the tide of the Revolutionary War.

After the dangerous river crossing, achieved overnight in ice-choked waters amidst a Nor’easter blizzard, the previously defeated and demoralized Continental Army won three decisive engagements, defeating the British in two battles at Trenton and one at Princeton.

These victories gave the Americans new hope and courage to continue fighting for liberty.

Seven years later, after the British surrender at Yorktown, Lord Cornwallis is alleged to have noted the importance of Washington’s crossing in a toast to him, saying, “…fame will gather your brightest laurels rather from the banks of the Delaware.”