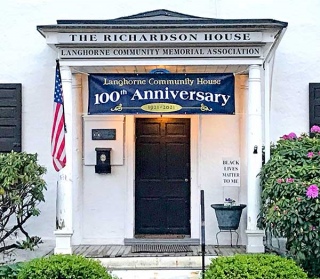 100th Anniversary of the Richardson House

The Langhorne Community Memorial Association will celebrate the 100th Anniversary of the opening of the historic Richardson House to the public in 1921 with an Open House on Thursday November 11th, Veterans Day, from 10:00am to 1:00pm.

The House will also be open on Saturday, November 13th.

The Richardson House served as the home of the American Red Cross, the Langhorne Sorosis, the YWCA, the Jesse W. Soby Post and has been the meeting place of many organizations.  Today it is the headquarters of the Peace Center and the Four Lanes End Garden Club.

A board of directors with representatives from each of the boroughs and the township oversee the building and property which includes the adjoining park.