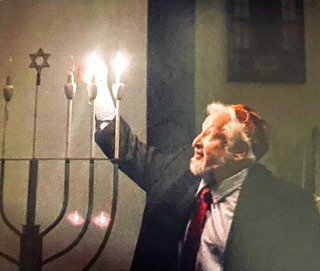 Sixty years ago, newly ordained by the Jewish Theological Seminary in New York, Rabbi Howard Hersch arrived in Trenton, New Jersey to assume the pulpit of Congregation Brothers of Israel, a flourishing synagogue on Greenwood Avenue in the state capital.

Forty-eight years later, Rabbi Hersch and the Congregation relocated across the Delaware River to Newtown, PA, adding new families from Bucks County to its base of Mercer and Bucks members.

On Sunday, September 19th, from 2:00pm to 5:00pm family, friends and members of CBOI gathered together to honor Rabbi Hersch, now the Rabbi Emeritus, for his sixty years of devotion and commitment as a spiritual and community leader for one synagogue, spanning the Delaware from Trenton to Newtown.

In two large open tents, there were were testimonials, a cocktail reception and dancing to a live Klezmer band, and dozens of current and past synagogue members honoring Rabbi Hersch and his wife, Joan (the synagogue’s educational director) for their many contributions to the community.