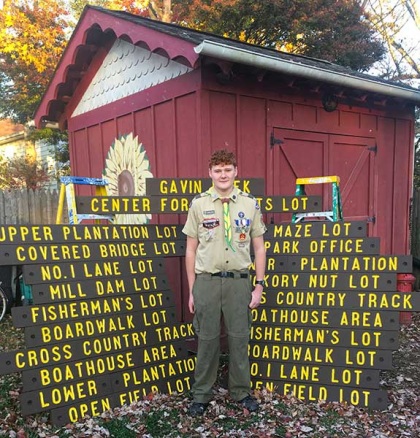 As we’ve seen resurgence to state parks and spending time in nature, Gavin Umek, of Morrisville, incorporated this into his recent Eagle Scout project, installing 22 signs and guideposts throughout Tyler State Park to help direct people and keep them from getting lost.

You can find his hand-lettered signs all around the 1,711-acre park, labeling each lot including the Center for the Arts.

“I really wanted to do something special for Tyler State Park,” Gavin says. “It was one of my favorite parks growing up.”

Well-known for its hiking, biking, and equestrian trails, Tyler State Park is divided by Neshaminy Creek into several sections, offering plenty of opportunities to meander along the creek. This time of year, the fall colors become vibrant and draw many people out of their homes into the cooler weather.

Inspired to give back and help others continue to enjoy nature alongside his own fond memories of time spent in the park, Gavin went to speak with a Park Ranger who could give him a better idea of what would serve the Parks’ needs best.

“The Park Ranger I spoke with gave me a list of things that needed to be done around the Park,” said Gavin. “One of those things was to install signposts along the trails and parking lots.”

It took Gavin two months to complete the project, fundraising money and accepting generous donations of wood from a local Home Depot.

“The Park supplied all the tools we needed to write on the signs,” Gavin says.

Gavin hand-lettered each of the 22 signs using a “router” tool, which is used to drill letters into the wood. It gave him an opportunity to learn some new skills and was an overall rewarding experience.

The result is a lovely, authentic and natural aesthetic that makes the signs appear like they are part of nature found along the many trails known and loved at Tyler Park.

Gavin labeled each parking lot and trail so people who are walking in the parks can easily find their ways back.

“The Park Rangers told me a few people have gotten lost before,” Gavin says.

To help prevent this in future and considering the increase in visitors to state parks statewide, Gavin took on this task and combined his love for helping others with his passion for spending time in nature.

Gavin has participated in the Scouts since he was 11, marking his seventh year now with Troop 121. This Eagle Scout project culminates many years of hard work and providing service to the community.

It has also inspired Gavin to continue working in nature with his future career goals.

“I realized my long-term goal is to become a Park Ranger [after completing this project],” Gavin says. “I want a job that allows me to give back to the community.”

Service-oriented, Gavin loves the feeling that he has contributed to his community and wants to carry this forward in life.

“I realized it can be hard work sometimes, but [it also] made me want to do it more,” Gavin says of becoming a Park Ranger.

For all those enjoying time in nature along Tyler State Park’s numerous trails and lots, you’ll have Gavin to thank for the signs leading you home.

According to the PA DCNR, “Access to the outdoors is more critical than ever for our well-being in these unprecedented times.”

Tyler State Park has become a go-to spot for recreational use and exploring nature by many, even as restrictions lifted earlier this year. People who drive out of the city to enjoy time in nature will now be able to find their way safely around the park.

Congrats, Gavin, on becoming an Eagle Scout, and happy trails to all at Tyler State Park!