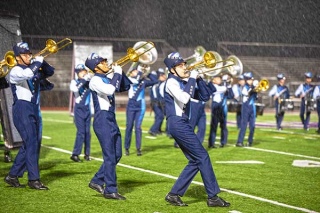 Amid a steady downpour, lightning struck twice for the Council Rock High School North Marching Band on October 16th, when they placed first in its division in a Cavalcade of Bands competition at Upper Moreland High School in Willow Grove.

It was the second consecutive first-place finish for the 59-member ensemble.

The band also took home the top trophy October 9th at Pennridge High School in Perkasie, which marked its return to the competition circuit for the first time since 2019.

Under the leadership of band director Wayne Bishop, the rain-soaked band performed its 2021 show “Shattered,” which, according the program description, “picks up where the fairy tale left off: the wicked queen is no more, but although the evil that lived within her mirror is broken and weak, it is far from defeated.”

The judges awarded the band first place in the Liberty A division, competing against similar-size bands, at the 53rd Annual Music in Motion Marching Band Competition hosted by the Upper Moreland Music Patrons.

“The musicians and color guard overcame a lot, performing on a rain-swept field,” said Wayne. “It’s a testament to their hard work and dedication that they were able to execute so well, especially under those less-than-ideal conditions.”

The CR North Marching Band competes in the Cavalcade of Bands circuit.

At a competition, a panel of judges evaluates the band on a variety of specific musical and visual techniques.

There are several opportunities for the public to see the award-winning band in action.

Tickets are available at the gate for upcoming Cavalcade competition November 6th at Hatboro-Horsham High School in Horsham.

In addition to taking part in competitions, the CR North Marching Band performs at football games at the Newtown high school, and travels to select away games.

The public is also invited to the “Stadium Review Concert,” in which the band and color guard take their field show indoors, at 7:00pm, Wednesday, November 17th, in the auditorium at Council Rock North. Admission is free. The high school is located at 62 Swamp Road, Newtown.

In addition, the band will perform in the Newtown Holiday Parade Sunday, December 5th. To learn more about the Council Rock North Marching Band, visit CRNBand.org.

PHOTO CAP: Members of the Council Rock North Marching Band braved a steady downpour Upper Moreland High School, but still took home the first-place prize in their division at the Cavalcade of Bands competition. It was the second-straight win for the Newtown-based band. Photo by Angela Flannery.