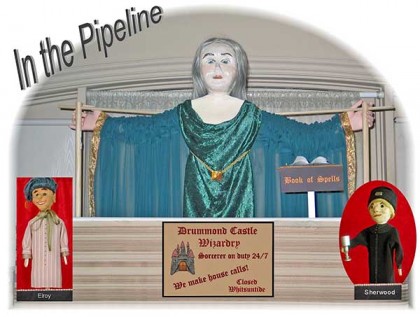 Cassandra commands her very own one-man stage presenting short humorous episodes from the lives of Elroy and Sherwood, two 12-year old aspiring wizards whose schooling takes place in Drummond Castle under the tutelage of Olaf the Awesome.

Her cautions dispensed throughout the performance are seldom if ever believed. This produces results that surprise the students and tickle the audience.

But what about the helpless citizens of Drummond? How do they defend themselves against balls and saucers flying from castle windows, raining down on the village below? And that’s only episode one!

Kids, the Drummondians need your help!

Why is this happening? It’s never happened before.

The learning curve for sorcery is very steep and Sherwood is having trouble climbing it. The Book of Spells, especially, gives him difficulty. Does he need glasses? What’s going to happen in future episodes when he’s confronted with steaming cauldrons and paying customers?

Drummond Castle is the finest school of wizardry in the realm. Why was he accepted? (Well, he is the son of the Duke.)

Whatever the reason and despite Elroy’s help, situations are aggravated by Sherwood’s complete indifference to Cassandra’s warnings…maybe he’ll listen to you.

Cassandra’s Opera will be a less expensive option to the Penn’s Woods main stage theater productions.

PHOTO CAP:  On the drawing board at Penn’s Woods Puppet Theater: ‘Cassandra’s Opera’